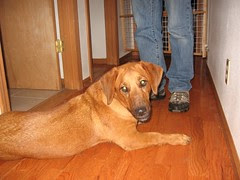 IMG_2926.JPG
Originally uploaded by kbshee
We went to our local animal shelter on Friday....Tim had seen a picture on their website of a dog that 'spoke' to him, and when we got there we found out that the dog was on 'hold' and that it would be a bit of a handful for us. We were thinking about leaving when I noticed a very quiet and gentle and frankly, silly looking dog, and spent some time with him. He's a Basset Hound/Something mix, he weighs about 45 pounds, is somewhere between 1 and 2 years old, and was a stray from LA.

His name, as of Friday, is Pilot.

He's a joy. He's a character...he is full of energy and love and happiness and joy. He follows Tim around like he is a god. He chases the cats and they don't seem to mind too much. He keeps nuzzling Juneau who puts up with it.

And he likes yarn.

He grabbed the Zauberball I was working with for Socks and ran around the house with it (not quite sure what's going to happen with that project now). He also found a hank of Wollmeise in the 'yarn room' and placed it gently at my feet. He's had various interactions with WIPs that have resulted in the reorganization of my knitting bag and the placement of every project in its own bag.

Oh, that face! So glad he accepted you! Bad about the yarn though...at least he understood the importance of the Wollmeise! :)

He's wonderful. Knit him something gold and black.

He's SO Cute!...and I am excited to hear that you have a new puppy in the house. Congratulations...a wonderful addition to your family ;)

Welcome Pilot into your new forever home!!! He's such a lucky pup!