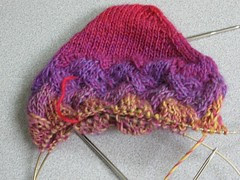 Have you ever had a project that you know is just going to end up being a disaster (an unwearable disaster) but you just keep going anyway?

Well, these socks were becoming that project, as the foot of the sock was a good 2 inches too big. In addition, the way the pattern was written didn't make a whole lot of sense (to me). So, I decided to frog the socks, and then start over (at some point) with a different pattern (Eunny Jang's sock pattern from IK). And I was happy with that decision.

For some reason, my entrelac didn't frog. Was it the yarn? Is it entrelac? (Google is no help). I just know at the pick up parts the yarn wouldn't frog. Almost like there was a not in the yarn.

Luckily, this isn't the most expensive yarn (I love it, but if it must go to the big pile of tangled up yarn in the sky, I'm ok with that). I know Tim will give it a detangling go if I ask him (but he just detangled a ball that Pilot unwound, so I hesitate, even though I know he would say yes). I think it has to sit there in an off-the-needles glob for a bit until I can face it.

Shame, 'cause those colors are beautiful.

Must be the yarn. I've frogged entrelac with no problem.

I look forward to seeing your Eunny's.

Sorry that they didn't work out but hope you can get them frogged because the yarn is so pretty!

Good luck with the next pair...