I may have mentioned this... 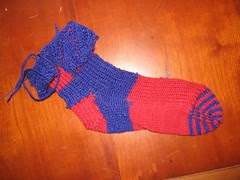 IMG_3148.JPG
Originally uploaded by kbshee
...but I really like this Tilli Thomas "Milan" sock yarn.

But, as I started knitting, I realized that the skein size was not really large. Each skein (I have one red and one blue with beads) is 165 yards, which really isn't that much, considering there is that fold-over cuff as part of the sock. But I think I'll be OK. Here's how the first one looks...the pattern is from "More Big Girl Knits" but pretty much I followed the pattern for the cuff and that was it. I like the cute stripes on the toe.

So stay tuned to see if I have enough. I weighed on the scale and I think I'm OK. But I'd be lying if I said I wasn't a wee bit worried.

Not much else going on except for general busy-ness. I'm involved with an initiative at school called the "Green Product Design Network." It includes faculty in chemistry, business, product design, and me. It's fun and interesting and I only feel a little weird because the last time I took a science class was in 1980, when I took Genetics pass/fail in order to graduate from college.
on April 22, 2010

Very cute socks - I like the striped toe too!