I owe you a better picture 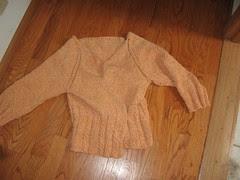 IMG_3235.JPG
Originally uploaded by kbshee
Because it looks like I just threw my completed Mr. Green Jeans on the floor and took a picture. I actually thought I had arranged it sort of nicely, silly silly me.

But I'll have plenty of opportunities to show you a picture of me wearing it. according to this recent update from the National Weather Service, and I quote from the KGW TV web site:

What would a cool and wet July look like? Hill said that a worst-case forecast would include seven to 12 days with measurable rainfall, a lot of cloudy mornings, and up to 15 days with highs only in the 66-76 range.

"If you look at a national temperature map, it's almost like we have become a separate continent," said Hill, "because literally everybody else in the lower United States is in a different season than we are. I mean, it really is just absolutely nuts!"
on June 22, 2010

I love the color of your Green Jeans. It's a fun sweater to make. Hope you enjoy it as much as I do mine.

We're in the 90's to 100's here and needing a lot more rain. I wish we had your temps and could get rid of some of this humidity.

No disrespect at all, but I'm much more interested in the weather there than the sweater on the floor. We are baking here.

We are even baking here in England!
And your sweater is lovely!

Seriously! Our first day of 'summer' was 50 degree highs. The last few days have been more traditional temps but I wouldn't be surprised if our forecast predictions mimic yours.