And yet another mystery sock 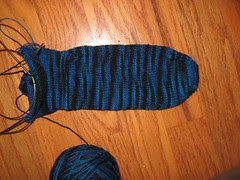 IMG_3356.JPG
Originally uploaded by kbshee
Here is my newest mindless sock, and another mystery sock since this is one that I balled and lost the ball band to, but it is a lovely blue/black and purpley stripe that I'm making for Tim. Mindless socks for him don't seem to go as fast as mindless socks for me (foot size differences) and this sock has been a bit, um, cursed.

Pilot has been growing up and calming down (a bit), and on the whole he is a much better dog than he was 9 months ago. Yet, one of his favorite things remains to be to grab a ball of yarn and run around with it as it unravels. Thus, I always try to remember to put projects out of Pilot range if I have to leave the room for a moment.

But with these socks, I didn't. Remember to put the project out of Pilot range. As a result, when I came back into the room after about ten minutes on the Internet in the office, not only was the ball of yarn unwound but he has also chewed the cords of the two circular needles to bits. Honestly, all I had left were four size 2 Knitpicks Options tips and about three inches of purple cord. And a partially unraveled sock.

I was initially worried because I thought Pilot had eaten the cords (and even chewed on one a bit myself to see if it was a. tasty and b. chewable; answers no, not for humans). So of course that meant two days of backyard poopage inspection to make sure all was well in the nether regions and to see if I could visually see any cords. Over the next few days, though, I think I found enough bits and pieces of cords scattered hither and yon that I stopped worrying.

TMI? Not really --- I would have been doing the same thing. Are we sure Pilot might not have a drop or two of feline blood?