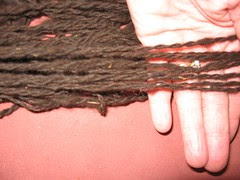 IMG_3378.JPG
Originally uploaded by kbshee
Some reflections on my weekend:

-I carded and spun more of Brownie's fleece. I focused on making a thinner yarn, and it worked...I think this is probably a light worsted weight which is what I wanted. It also seems really, really nicely balanced. I filled a bobbin with two ply and it was about 100 yards...what I got with two bobbins on the first goround. So I'm happy about that. I ordered some silk from Treenway Silks to do some blending, and I think that will go well too.

-Unbalancing thing #1. After last weekend's county fair, I wrote an email to the Fair Board. While I liked a lot of improvements (and I listed them), I was very unhappy with one exhibit they had (it was promoted as an Amazon adventure but was sadly some exotic animals in too small cages). No response from then. Until. Sunday, the paper features an ad from the Fair board talking about the success of the fair. And in the middle of the ad was my 'positive' quote from my email (not attributed but still). It sort of shook me that someone would take an email and quote it, without my permission and, arguably, out of context.

-Unbalancing thing #2: Tim and I were at an art store downtown yesterday when we heard what sounded like a car backfiring. Looking outside, it looked like a smoke bomb had been dropped down a manhole. Going outside, we hear a few more explosions...three manhole covers were blown out of their holes. It turns out there was an underground fire. I was totally freaked out. And everytime Tim went near a manhole I got even more freaked. Tim says these happen often in NYC...but not so often in Eugene.

Calmer than you, I suspect.

When you're working with the fleece, do you connect it with Brownie? I'm serious about this --- is it anthralpacaized, or just fiber?

Definitely anthralpacized. It means a lot more than just random fleece from a random fiber animal. I have not spun this much ever!