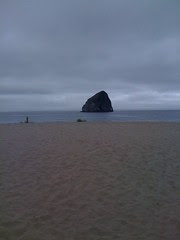 IMG_0180.JPG
Originally uploaded by kbshee
We are back from a few days in Pacific City, our favorite place on the Oregon Coast.

Oregonians tend to have 'their' favorite place on the coast, and PC has been ours for about 7 or 8 years. We just love the beautiful haystack rock, Cape Kiwanda, and the surrounding areas. This year we rented a tiny little house (read: shack) that had two things going for it. First, it was right on the beach...this is the view from the front of the house. Second, it was about a three minute walk from the Pelican Brew Pub, and about a four minute walk from a really good coffee place.

The weather was um, interesting: warm but rainy with bits of wind. We got a good paddle in on Wednesday at Nehalem Bay...we put in at a little town called Wheeler. Thursday was pretty rainy all day but Tim did a little paddle in the ocean while I stayed home all cozy with the dogs and read "Wolf Hall" and knit a little.

The house is one of those old houses probably built in the 40s or 50s that really needs tearing down and rebuilding, but luckily it still stands and is a pretty affordable rental for a house right on the beach. The floors were brick...yes, just like a patio...with rugs on it. There was a HUGE fireplace which we enjoyed, as well as an 80s era projection television where we watched tapes (yes!) of old movies, including "The Wild One" and "Sometimes a Great Notion", which was filmed nearby-ish.

The dogs had fun too, although it took Pilot a while to settle down and figure things out.

Now back to reality...orientation week next week and then classes begin a week from Monday.
on September 18, 2010

I'm thinking that's a gargantuan shark fin rising out of the water. The rock story may just be legend.

Sounds like a great kind of week-end before heading back into the school year.