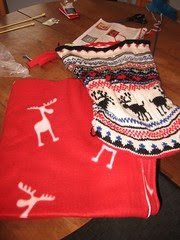 IMG_3484.JPG
Originally uploaded by kbshee
Sorry for the lack of posts, but it has been another busy week. Let's just assume the second half of the term (ie the next five weeks) are going to be just as busy and I'll stop apologizing.

A gloomy day today here in Eugene...a good day to work on finishing the fair isle bag. Today I sewed the bottom and the side seam, attaching a D ring. I also used this red felt fabric to 'sew' a lining (thank goodness I found that iron on seaming stuff in the closet today, or else I would still be trying to thread a sewing needle). But now I'm trying to shrink the bag down a bit because it is floppy. I cut out a circle of rubberish stuff that Tim found in the garage for the base of the bag.

Once the bag is dry, in goes the lining, on go the grommets (I know own a grommetizer) and voila, it will be done.

I have a lot of yarn left over, and Tim has been working out in the garage on the kayak so I'm going to make him some felted fingerless gloves. It gets chilly out there. Right now he's working with the kiln set on low and that's helping.