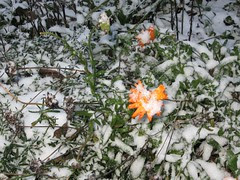 IMG_3514.JPG
Originally uploaded by kbshee
Usually this is how it goes here:

-the weather people start talking about snow about a week before it might happen.
-people spend a week all in a lather in case it snows.
-people are glued to the TV the night it is supposed to snow wondering if it will snow.
-it doesn't snow.

Well, it didn't go like that Monday night. Indeed it did snow...probably a whole HALF AN INCH with a little bit of crusty ice on top...and all the schools closed except. of course, the UO, where I held my 8:30 class Tuesday morning. 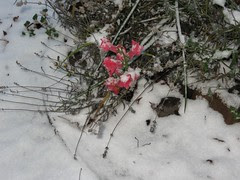 IMG_3512.JPG
Originally uploaded by kbshee
Tim took me in to school...it is less than 2 miles away, with the first mile being fine and the second mile being pretty icey dicey. Unusually for Eugene, everyone was driving very slowly and carefully. At the start of my 8:30 class, about half the class was there, but the rest slowly drifted in which was pretty impressive..by 930 I think I had 10 absences out of 110. Particularly remarkable since the class following mine...also 110 people, had only 25 in attendance!
on November 24, 2010

What can you say --- they love their Professor S!