Gloves are the New Socks 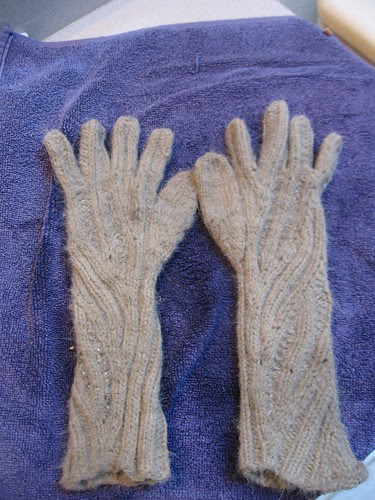 You heard it here first.

I'm now sort of addicted to gloves. These are the Sivia Harding Fluency gloves, which I love. You can see the beads here too. I also cast on for another pair from the new Knit Circus , the Blue Lupine Mitts on page 76. However, I will probably knit these as gloves and not in blue. I cast on with some leftover Debbie Bliss Rialto in purple and I think I'll have enough for gloves with what I have.

And now, a bit of editorial commentary. Knit Circus is an online magazine that I've looked at but never been that impressed with. In the new issue, though, I saw at least two patterns I wanted to knit (and a third I want to as well, only it is a kid's top, not one for adults). Anyway, I was having the 'is it worth is' conversation and went to see how much the patterns cost, and you get ALL the patterns, downloaded, for $7.95. That's a good deal...the patterns I want are both worth $4 for me. Kudos, Knit Circus!

Contrast that to an email I received from an unnamed yarn store selling patterns from an unnamed (here) designer that I REALLY like and that I've knit patterns from before. The patterns cost $8 each! I'm not sure if they were downloadable but if there is a mailing cost..argh! Now I know it is only double of what I paid for Knit Circus, but for that I got a slew of patterns instead of just one.

I do want to support designers, and I appreciate all the work that many designers put into their designs, and I know stores need to make a profit as well. But $8? Really??