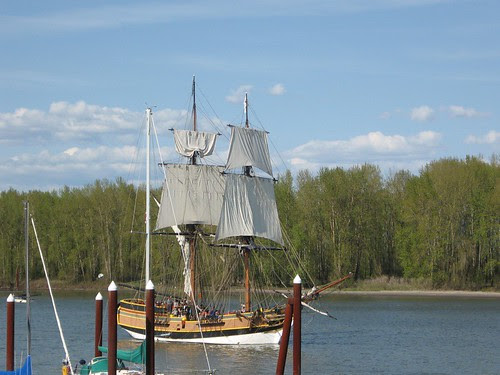 Tim and I drove to St. Helens, Oregon, yesterday to visit two Tall Ships that have been sailing up the coast from San Diego. They came down the Columbia river and will end up (probably via the ocean) in Vancouver, BC. Tim is a big fan of the "Master and Commander" books and when he found out that he could go for a three hour sail...a BATTLE sail...he really wanted to go. With my potential for seasickness, I stayed on land with the dogs.
We had a warm, beautiful sunny day on the river, and here is what I learned:
-our dogs don't like musket fire. Or cannonballs (even though they don't shoot out of cannons, they just fire charges, they were loud all the same.
-there are people who dress up like pirates and go to events like this just to hang out. All day. Dozens of pirates were there.
-likewise Revolutionary war re-enactors. Now I'm not that great at history, but I don't think that war came this far west. Anyway.
-Both these groups own their own cannons and muskets.
-St. Helens is one of the towns where the Twilight movies are filmed. I saw several young girls dressed, I believe, in vampire homage but I can't be 100% sure. But since they were visiting the 'Twilight Experience' store maybe they were. I mentioned to Tim that since we were there, we should watch the Twilight movies again just to enjoy them ever more! He did not have a positive reply to that.
-As you might be able to tell from the picture, these ships might be tall but they are small. Amusing interchange #1: visitor to crew person. "I understand you can book passage on one these ships. Do passengers get a cabin or a stateroom" "No maam We call it more of a communal sleeping area (pointing to this patch of empty floor below deck."
-Amusing interchange #2. Woman to one of the many pirate kings. "Are you a pirate?"
Tim had a great time, although the battle had to be shortened given the freighter traffic on the river. Oh the challenges of the seafaring life!

You totally left me hanging on Amusing Interchange #2. What was the pirate's reply?

I used to know a girl that did the pirate thing. They had ships and everything. She said it was part of the SCA, but later (when I had a boyfriend that was SCA and I asked him about it) I found out that the SCA goes back to a time before pirates. So, she must've been mistaken, or said "It is like the SCA" and I misunderstood.