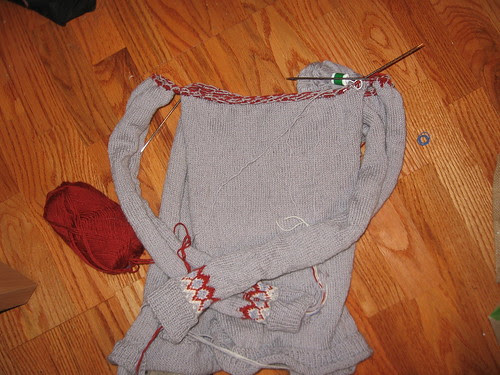 It's been a bit of an odd start to the week. But first: knitting. I'm at that point in the fair isle sweater where I am dong some heavy duty fair isling! There are 300 stitches on the yoke of the sweater and I've knit about four rows of the fair isle. So far, so good (although this is a lot of stitches, even for two circular needles). A bit unwieldy.

So I'm in an organizational mode. I had to move a bunch of stuff, including my computer, home for a year and a half due to a major construction project at my office. So all the books and papers and STUFF are now currently trying to find a home in our (already full) office and (already very full) guest/yarn room. And on top of that, my home computer started going south, so I got another laptop and a portable hard drive. So the already full office needs to find room for two additional computers. I don't even want to tell you what the grand total of computers (working and nonworking) is in our house now.

BUT the good news (ish) is that I'm going through the gazillion scraps of patterns and organizing them into a file that has been sitting around empty for a few years. The patterns are in notebooks, folders, and just loose running around the office (yes they do run. Sometimes they're on a shelf and sometime they're on the floor. What other explanation do you have?). And I think I can prune a lot of them....as cute as it is, will I ever make the felted pumpkin basket? Will I ever make those bulky 80s sweaters from patons grace? No don't think so.

So that's my day so far. I hope to do a few more rows on the sweater because it just looks sort of scary the way it is.

Not sure I'd go with "scary" on the sweater. Really nice colors.

And congrats on the five miles --- keep it going.