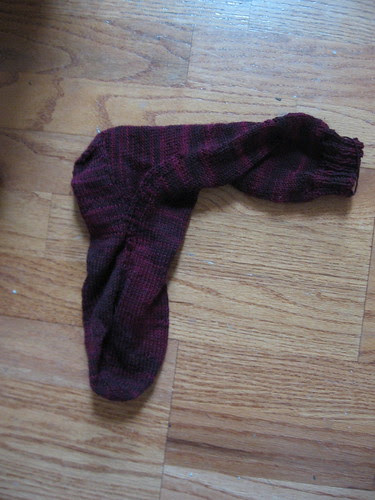 Today we got up sort of early and drove up to Blue Ridge Reservoir, about 60 miles away
'up the McKenzie' as they say here. We got the boats in the water and did quite a paddle...Tim looked at the map afterward and thought that maybe we had paddled six miles! It certainly feels like it right now as I lie on the couch with thismuchenergy left to type on the keyboard.

This sock's partner is almost done too. So I'm almost done with these socks and with one of the pink sweaters. It's time now to think about new things to cast on. One will be that sweater with the fair isle hood (could be a mindless project) and I've also found some super bulky yarn in the stash that will knit up quickly into a bit thick sweater. So those are the two plans.

The first mystery project is done and I have a second one to do too.

I can't believe it is the end of the first week in August and summer seems to be ending. Yikes!

It sounds like you're making great progress with your knitting this summer.
The pink sweater's looking good too. Congrats!