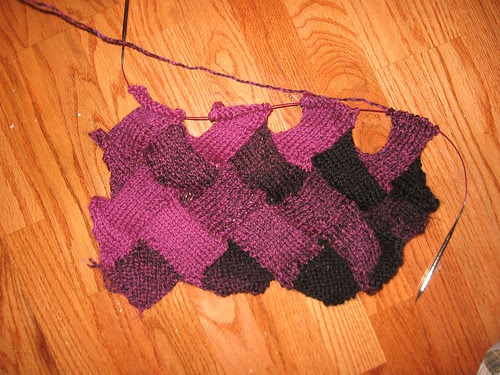 I've had a bad case of startitis lately..the knitting ailment that makes knitters cast on for new projects when other projects are not yet done.

Before I had finished the purple fair isle or the shark socks, I cast on for two other projects. However, I figured that I was so good...so FOCUSED...on finishing WIPS during the summer that I deserve it.

First is the Entrelac Wrap from the new Debbie Bliss magazine. i've been planning an Entrelac wrap with this yarn for a while. The yarn is Universal Yarns moods which is 50% wool/50% acrylic. I got it at a sale for nothing. basically. Anyway, if the Debbie Bliss wrap looks familiar it is because it is basically Lady Eleanor with thicker yarn on bigger needles and fewer triangles. There's also squares at the bottom instead of rectangles. Anyway. I really love entrelac and so far I love doing this project.

The Fladdle! Yesterday Tim and I went out with our friend Steve for a little river adventure. Tim and Steve went in Steve's raft, and I took my kayak down the McKenzie river. Now this might now sound like anything, but our kayaks are flatwater kayaks which means they are meant to be paddled on water that is, well, flat. Like lakes. But this stretch of the McKenzie was relatively calm with a good current (maybe 3-4 miles per hour) and some Class I rapids sprinkled in here and there. I did pretty well, considering I've never paddled in any type of rapid before...I knew where to position the kayak but I forgot to paddle through the waves at one point which led to me getting completely soaked. But it was fun.

Spectacular! I've never had any success with entrelac; you got that gene.