What are you doing New Year's Eve? 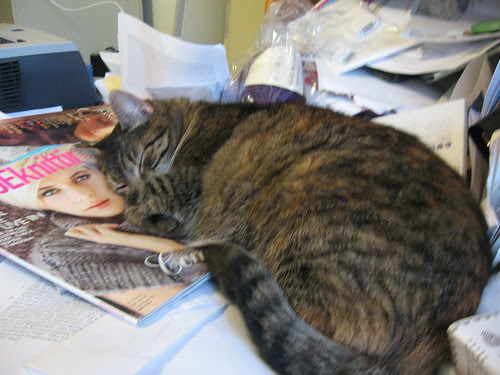 If you're anything like our family, you're curling up with a knitting magazine and taking a wee winter's nap.

It's always a marathon at our house--will we make it til midnight? At what time can we start getting ready for bed? How crummy will we feel tomorrow? Etcetera etcetera.

Tim is making dim sum tonight...I'm sure there will be pot stickers and spring rolls. Probably some Shwetty Ball ice cream or perhaps some vanilla with Fermat Branca sauce. And cookies cookies cookies, so that sugar buzz should keep us going til about 10:30 or so.

We'll be having a "Downton Abbey" marathon--we have four episodes left on Netflix and we also have a bunch of 'The Wire" so we'll be entertained.

It's been a tough year, but as Tim was mentioning on our walk this morning, it all ended up well. We're all alive and relatively happy, healthy and sane, and we're looking forward to the next chapter of our lives unfolding in 2012.

Resolutions? I'll steal from this morning's "Mutts" comic and say to "Be Here Now"--to spend more time in the present and less time wallowing about the past and worrying about the future. We'll see how that works out.

Happy New Year to you and yours! 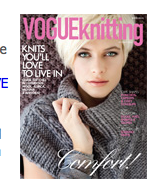 I'm confused. Wasn't I just mocking the VK with Martha Stewart on the cover? Well, apparently VK took all the crappy patterns laying around the VK Design Studio and plopped them all in this issue, entitled "Knits You'll Live In". OK...it's not 100% crappy. There's actually...

The Good: 37 patterns for $6.99, plus pictures of a lot of free glove patterns downloadable at VK.com . Probably my favorite part, these free patterns. I like a long cable cardigan (#9)and a relaxed pullover (#11).Some pretty accessories in purple (ok, a pair of mittens).

The Bad: The "Knit Living" section has many, many pillow patterns AND a pattern for a knit ottoman (ain't happening here). I'm not a fan of knit skirts, so hoorah, 5 knit skirt patterns! And two pairs of purple socks are ruined (for me) with drop stitch techniques. Honey, if I see a drop stitch in a sock, I've screwed up.

The Ugly: Oh, the ugliness. There's a section called Urban Rednewal (not a typo, RED newal) which are capes and ponchos knit in red yarn. I'm sorry, VK, but a pretty color does not make up for ugly cape poncho things. Then, there's an "eye catching split sleeve effect" cape that makes no sense at all.

Two, count 'em, two turbans. Turbans. Tur. Bans. True, they are positioned as "vintage chic" but who who who would wear these? 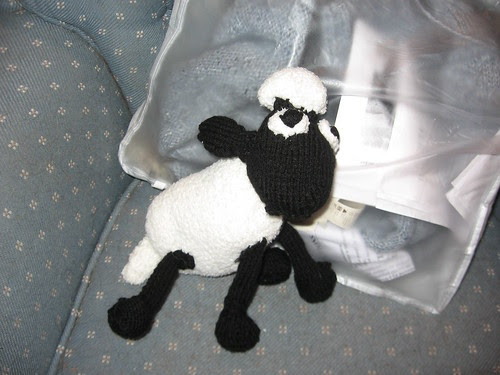 We have a tradition where Tim and I make at least one gift for one another for Christmas. This year it was quite the festival of homemadeness, as Tim made some lovely jewelry for me (pics to come) and I made him two knitted gifts.

You may recognize Shaun the Sheep, who is quite the popular one in our house. This came from a kit with lovely chenille yarn from England. Shaun came along with a Shaun the Sheep Christmas DVD. Ho Ho Ho!

Christmas came and went, a good few days: a lovely dinner Christmas Eve night followed by "White Christmas", presents in the morning and an afternoon of phone calls, dog walks and cooking (Tim) on Christmas day and then Boxing Day with our friends Steve and Jen and their two kids.

The only knitting type gift was sheep salt and pepper shakers (which will turn up on the blog header, thanks C and B!) and Tim made some beautiful celtic inspired jewelry for me. That was a wonderful surprise. Also, ZUMBA! And finger paints. Because I am six.

Tim goes back to work today and I'll just sort of hang. I started REAMDE last night and it's pretty good--it's also a gazillion pages long but it moves pretty fast. Knitting too--not a lot has been done but I promise to post pictures this week. 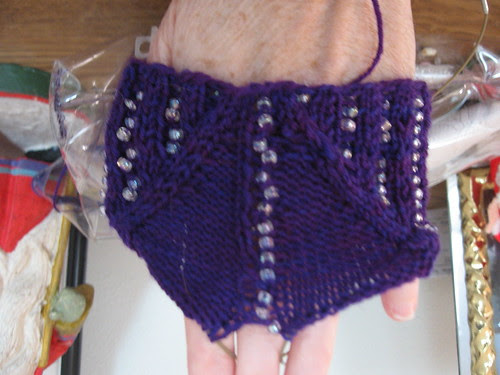 I love on Christmas Eve how the world seems to screech on its brakes and everything slows to a stop until around noon tomorrow.

I've been working on these socks for a few weeks--they take a while as I'm adding the beads one at a time as I knit. It's Sivia Harding's Winter's Eve pattern from the STR sock club from a gazillion years ago. The yarn is Wollmeise. I had put together the pattern, the yarn and the beads in a project bag and then, um, sort of misplaced it. But I found it again and am loving these socks. The beads are a bit big but I can deal.

Have a beautiful Christmas! 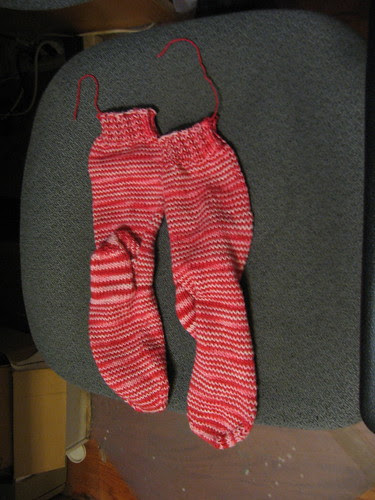 Anyway--knitting continues, although I don't have the patience to finish the fair isle hood. Maybe I'll work on it during football next week. We'll see. I've been finishing up my syllabi for next term (new class! new graduate class! ARGH!) and now that the syllabus is done I better start on the reading, which is pretty heavy. Double argh! 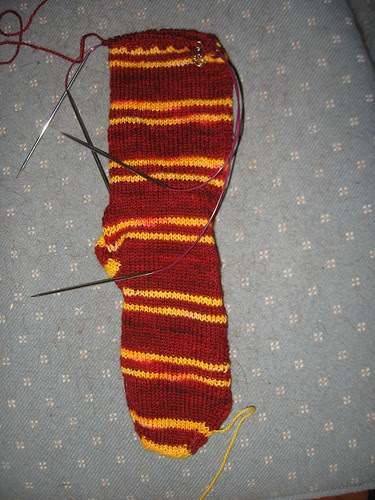 You need to roar it like the Sorting Hat.

Anyway, it is Christmas so I'm reading a Harry Potter book (#4, my all-time favorite...what's yours?) and knitting on Harry Potter inspired socks. These are Gryffindor socks from Sunshine yarn's Harry Potter sock club in, um, 2007.

The yarn has been around for a while. 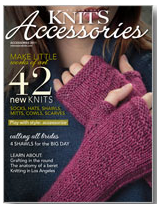 As much as I disliked "Jane Austen Knits", it's all good after several perusals of "Knits Accessories", also published by IK. Here are my thoughts:

3. Even though I don't like lace, I may knit the Trousseau wrap because I have the perfect purple laceweight Wollmeise in the stash.

4.I'm probably going to cast on the Meridian socks this week, and want to do the thrummed slipped called "Highland Slippers".

5. I love the Copenhagen Hat.

6. Readers of my blog know I'm not crazy about cowls. But likely, there are only a few (and even one I like--the Tilt Cowl) along with the Two Ribs Infinity scarf which I think is great.

7. It's too bad there are only four glove/mitten patterns, because I'm going to knit them all.

8. One thing I really like about this magazine is that the designers use yarns that aren't break-the-bank expensive. Sure there are some high end yarnchoices, but there's also stuff made with Brown Sheep Bulky, Cascade 128, Lion Brand, Paton's and Plymouth. I really appreciate that--it makes it easy to mix and match from the stash when many projects use 'workhorse' yarns. 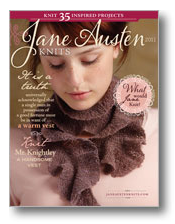 Well, you would be wrong. It is a beautiful magazine but not just for me. Here's a few thoughts:

1. The cover price is $14.99--a bit pricier than many other publications. You get 36 pattens so I guess that's a pretty good deal. Unfortunately, there are a lot of patterns that I have no interest in knitting. Tea Cozies. Reticules (twee little purses). Capelets, shawl and lacy neckwear. If you like any of these things, this magazine may be for you.

2. Many of the sweaters are either shrugs or spencers. A spencer is a sweater that ends right under the bust, which is pretty typical in Austen's era. I don't think this is a flattering look on many people, and when I read a spencer described as 'flattering' (next to a not flattering picture) I got a little annoyed.

3. There are lots of articles speculating on whether Jane Austen knit and if she did, what she might knit and what she knit those things out of. If you are interested in this type of things, there's a great book called "What Jane Austen ate and Charles Dickens knew" whihc is much more interesting.

4. A few things I did like: "An Aran for Frederick" in a great cable pattern and the "Marianne Dashwood Stockings" are pretty neat looking. But that's about it for me. 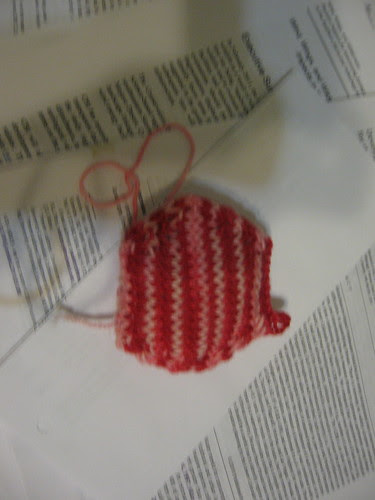 Here's #25, knit in the candycane sock yarn that I've been working on (finished the socks, yes I did). 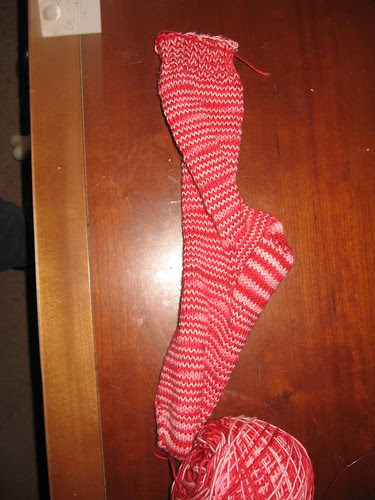 Not much to say: a basic sock made with a 'second' of Socks that Rock. Very festive! 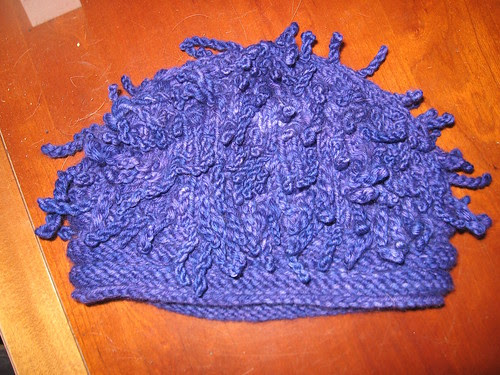 Sorry for the blog silence...I have no good reason other than, to be perfectly honest, I just didn't feel like blogging.

It's been a weird end of the term. The University's President was unceremoniously fired at the end of November. I'm on the committee that meets with him weekly to 'advise' him, although he's taught me more than I had advice for him. So it has been a very hard struggle for me to deal with this, to run the committee and to try to help the University stay focused and upbeat and committed given the loss. On top of that was the end of the term and the panic to get stuff done that always comes with that. And so here I am, back again!

I have been knitting. This was my therapy: the anemone hat by Cat Bordhi. Boy, I wish I had this one while I was still in my ten mile mode---it eats up lots and lots of yarn with the little tendrils. It's a couple hundred yards in Malabrigo Merino, any soft worsted will work. There's also an option for a mobius brim, if you are a fan of Cat's mobius.

And now the run til Christmas. Our presents are pretty much on their way to where they need to be, and we have decorating and cookies to accomplish. And cards. But all will be done in good time.

Sorry for the Silence

It's been a bit stressful, with the end of the term and the President of the UO getting fired this week. But knitting pretties to come. I have to say I love that I don't have to worry about yard counts!
on December 01, 2011 No comments: