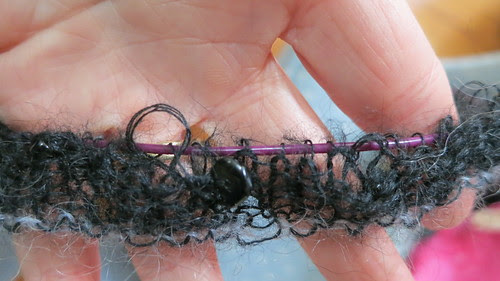 I've had this yarn called Zing String in my stash for a while, and wanted to knit something with it for a bit. Since I'm so into cowls, I realized this would be a great yarn for cowls.

Zing String, by Mango Moon, is called a 'carry along' yarn: it is very thin laceweight with a little 'thingee' strung on about every two inches. I'm knitting right now with the black, and the 'thingee's are all black stones and beads in different shapes.

My first attempt was knitting this 'raw'--that is, not as a carry along but just by itself. Did not work. Too thin yarn and the thingees kept getting n the way.

Back to the stash! I found Elann Silken Kydd (kind of a faux Kidsilk Haze) in both black and grey, which match the two zing string colors that I have. So I cast on 200 stitches and started knitting---right now Ihave one black stripe, probably about six rows, and one of the rows has the Zing string in it. I realized that I should have knit the grey stones on the black, but I'll try that on an upcoming stripe.

So pretty and delicate. I'm looking forward to seeing more.

What a great idea for yarn; I'll have to look Zing String up.