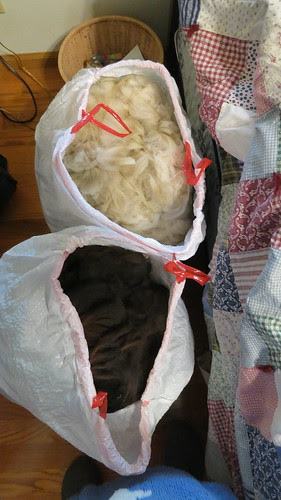 IMG_0926, a photo by kbshee on Flickr.
Yesterday was shearing day at Silk Creek Farm!

As some of you know, I own two alpacas--Brownie and Atom, who live at Silk Creek Farm, about twenty miles south of Eugene. The farm is owned by my friends Bil and Julia--both work at the UO and I've known them both a long time, they do a wonderful job on the farm and raising three exceptional daughters.

I missed shearing last year because I was teaching in Portland, so I was glad the schedule worked out this time. I've helped several times in the past. When their herd was bigger (they've had more than twenty at one time, I think) we had quite a crew out helping. Now they're winnowing down the herd, and they had only ten to shear (including mine). There is a new cria, too, who did not get sheared.

This is the third shearer I've worked with, and in my limited experience with shearers I would say yesterday's was the best. His name is Steve Bell and he works up and down the coast--if you want his contact info, let me know and I'll hook you up. Why was he good:

-he gave very clear and calm instructions to those of us helping. He made me feel he trusted me to do my job.
-he did not rush but finished an alpaca in about 10-12 minutes (I've worked with a shearer who does one in five minutes). This is a good amount of time--the animals are minimally stressed and he concentrated on getting a really good shear.
-He creates a gorgeous blanket (first cut) and does a good job with the second cut. No third cuts--which are the 'leftovers' he didn't get the first time around, and are relatively useless. No third cuts also means a much more beautiful blanket.

The two bags above are the first cuts (blankets--from the body of the alpaca)--the top is Atom, the bottom is Brownie. I'm going to send these off to a small mill that does small batch processing. I'm pretty behind on my carding and spinning from the previous shearings so this is a good decision to get this processed.

And my job: the head. Alpacas, as you know, have a long neck which flails around when you're manipulating the alpaca for shearing (we lay them on their sides). So my job is hold the neck down and keep the head still. It puts me in the line of fire for alpaca spit (not pleasant) but I also get to spend time holding and petting and talking to all the animals, which makes it a great job.

After shearing, Tim and I took the kayaks to Fern Ridge Reservoir, where we got stuck in the mud a few times and had to dig out.

I've never had sore knuckles before. Luckily they seem less painful now than first thing this morning.
on June 23, 2013

So very cool! Anxious to see the finished yarn.