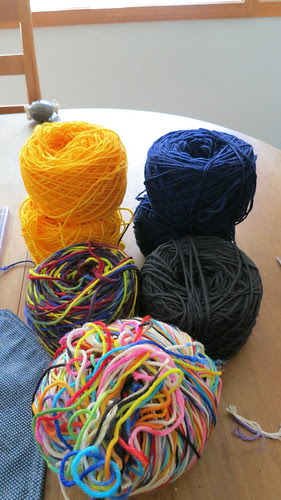 So I balled up some yarn for some more projects to end up the summer.

In the front--a ball of Masquerade by Dashing Dachs which will be a cowl of my own design.

In the middle, two balls of Malabrigo Prive Collecion (or something like that) which will be the 'checked scarf'.

And finally, some Yowza Whata Skein which will be a Pamisos.

Plus I cast on for the Jeweled Cowl, stay tuned!

PLUS!! It is my summer of winning knitting things. I won a darning egg in the Twist Collective summer anniversary give away. Um, yay!

You DO have remarkable knitting-winning skills. You got THAT gene.

The Masquerade is pretty, and that yellow/gold is quite striking. Anxious to see them all put to use.