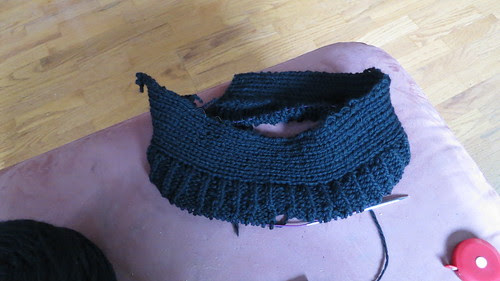 As mentioned in my previous post, I'm making a skirt. I find most knitted skirts hideous. However, after playing around on the Rav, I found a pattern that was in the December 2010 IK called the Isobel skirt by Cia Abbott Bullemer.

Did I mention that I HATE twee pattern names? I haven't for a while. But I do. And this is a pretty twee name. "Hi, do you like my skirt? Its name is Isobel." Please.

But anyway--this isn't the EXACT skirt since the pattern called for Manos silk dk yarn and this Eco Wool heavy worsted yarn but I'm making do. First I knit the waistband in a ribbing with some button loops at the end, and then picked up stitches around the waist. The ribbing is K1tbl, p2 and then the increases are done in the purls to eventually get up to K1tbl, p4. And it kind of looks like pleats but not really. Kind of ingenious, I must say, Ms. Bullemer.