Graduation, Ten on Tuesday, And Other stuff

Graduation was yesterday. It was a long and crazy day.

The "Big" ceremony was at 9am. It begins with a parade called the 'Duck Walk" which goes from the center of campus to the ceremony cite, the Matthew Knight Arena: 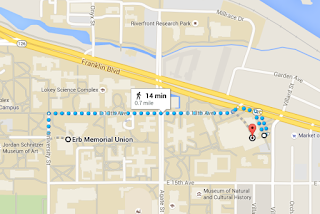 The way the 'parade' is supposed to work is that the graduate arrive outside of our student union, they go gather around the 'banner' for their school, and then one at a time, each school marches down the street, led by the banner carrier and two professors serving as 'Marshalls'.  Marshalls tend to volunteer, except this year only one person volunteered from the School of Journalism and Communication (my school) and so I was asked to Marshall so I said yes.

The map above says the walk is .7 of a mile, but in reality it was longer since we had to walk all the way around the arena, down the loading zone into the bowels of the arena and then on to the stage. Chris had his phone tracking steps and he said by the end of the day we had walked over five miles (because we had to do the walk again in the afternoon for the J school graduation).

Anyway--in the morning it took almost an hour for that whole group to walk to the Arena and get seated. Then the ceremony was pretty boring. Then we walked back, I did some work for a few hours, and then put on the mufti and did it all again.

My colleague Nicole (on the left)  took this photo at the start of the walk (my colleague Chris is in the center) when we were happy and not sweaty and before the scrum began. 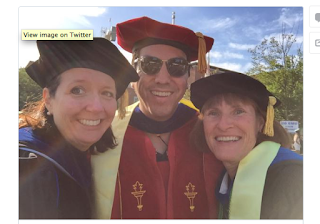 Today's Ten on Tuesday is the "Summer Bucket List"

1. Read. I really want to try to get into "The Magic Mountain" and "Godel Escher Bach". Perhaps the 12 hour flight to New Zealand will be good time for that.
2. Work on my arms. I have slacked off the weight lifting (small hand weights) and want to get back on that.
3. Garden. Get our front yard and back yard into shape (they're small, it can't be that hard).
4. Get research projects going--I'm fortunate to have some funding and now have to get off the stick on getting the projects going.
5. Knit of course--but I don't have any big plans except maybe get stuff that is in the works done.
6. Spend more time with alpacas--we are going to breed Brownie tomorrow and I want to spend more time learning about them.
7. Learn to weave?? I just saw that one of our LYSes is having a four-day weaving workshop on Wednesdays at the end of the summer. That might be a fun thing for me to learn.
8. Kayak new places.
9. Hike new places.
10.Ride my bike. We have some nice bike paths near us but we live at the top of a long yet slight incline which always puts me off riding my bike. I am going to try to work on that this summer. Tim has an idea to try to ride a mountain hgihway next year so I have to address the slight incline thing for that to happen.