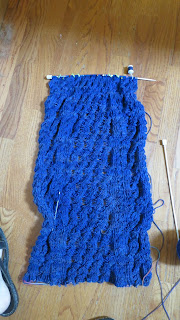 Another repeat has been completed on Jeanie so that is rolling along. I do think it is more than halfway done but I need to do a measurement.

I did think of two projects I want to do for the end of the summer. The new IK (saw it on the Rav since I no longer subscribe) has a great sweater (imho): the Tucker Sweater which is reminiscent (sp?) of the Tangled Yoke Cardigan which I also love (and made).. I have some Paton's "natural" wool for this one. I also have a hankering (ha!) to make a henley (a Henley Hankering!) and I have about 1500 yards of merino and I think I'm going to make Notre Dame du Grace! It will be a bit slow going because of the seed stitch but I like it.

I also have plans to make Blue Hands but one hand will be black with maroon and one will be maroon with black. And hats from the yarn I bought in NZ. And I also just saw a pattern on Rav for socks that I MUST make: drachenschwingen!  So I think my knitting mojo is back.

This is cool -- As I've been out collecting data, sometimes my mind wanders to 'all. the. knits. I. want. to. knit.'. The Notre Dame du Grace has been on my favorites list for ages (well, since it first came out I think) and for some reason I've been thinking a lot of that knit this summer and realizing I really want to make it. It'll have to wait until winter, but maybe seeing your progress on it will help motivate me to cast that on this winter!

Catching up and saw you had a wonderful time in NZ. Not surprising, but so glad that the trip was all you and Tim wanted it to be. John and I hope to go there at some point after all this fieldwork is done. But I'm not sure I'd be able to drop off a 22 foot cliff in a kayak. Kudos to you my friend. Kudos to you!!! ;)

Hooray for the return of the KNITTING mojo. I get twitchy when my mojo leaves for a bit!!!

Between the two of us, you so totally got the cabling gene. Though the back of that sweater is almost gorgeous enough to get me in the spirit.