We had a quiet and nice weekend. Tim sadly has a bad summer cold so that put a bit of a damper on some original plans but it ended up we spent a lot of time hanging out on the patio outside, reading and talking. So we can't complain too much! 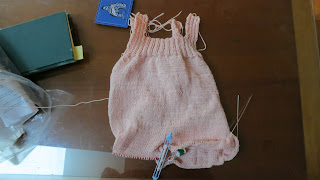 Let's see what else? I have a hankering to do entrelac, so I think I will ditch my "Blue Hands" glove idea (the yarn I wanted to use was too think) and make an entrelac slouchy hat out of that. I also have some chunky purple yarn for another slouchy hat and maybe then use the yarn from NZ for gloves.

Reading:
-finished "Green Dolphin Street" and loved it, I wonder if I would have been brave enough to take a sailing ship to marry a lad in 1840.
-returned to "The Luminaries" and I like it but.it.is.dense. so I need a break. My break is "A Woman with a Secret" by Sophie Hannah. It is about....wait for it...a woman with a secret (although I just started it and I sort of know what her secret is but there's stuff that needs more connections). Anyway. It is in that "Gone Girl" "Girl on a Train" mode (and I"m surprised it isn't "A Girl With a Secret") so it is a fun page turner about a woman who makes all the wrong choices.

Watching:
-we watched the second match of the Bledisloe cup where our All Blacks DEMOLISHED the Wallabies (rugby). The Rugby World Cup starts in a few weeks so maybe I'll understand the game by then.
-"Slow West"--streaming on Amazon. A very different take on the American West (filmed in New Zealand)
-"The Affair"--I guess this was a Showtime series? It has Dominic West in it (who plays American better than most Americans) whom I love and also Ruth Wilson who honestly scares me completely in everything she is in (which has been the remake of "The Prisoner" and a few episodes of "Luther" in which she is terrifying. Anyway...just watching her terrifies me. But after one episode I'm pretty hooked.

Summer colds stink. I am hoping fervently that the kid just has allergies. I may have broken him these last few weeks with all the activity, ha!

Ruth Wilson was amazing in Luther. I would imagine her intimidating in real life.

You've always got such interesting reads going on. Have a good week!

Thanks! Glad to know that we are in the same Ruth Wilson camp--I wonder if she knits?

Those summer colds are the WORST. Glad you didnt catch it.