Before I get to the knitting, I want to tell you about our amazing day yesterday--we went over to the Coast to meet with a potential builder and it went great!

Background: we've owned a lot on the coast for 11 years in a little town called Pacific City which is about a 2 hour 15 minute drive from here (that is, if the road that is the 'short cut' isn't closed, which is was yesterday, but that's a story for another time). It is about half a mile from the ocean as the crow flies, but it is up on a hill and there's a river and a creek in between. It takes maybe five minutes to drive to the ocean--we could walk but it would be down a windy hill that is kind of out of the way. It is a few hundred feet above the shoreline.

So we are in a good place, finance wise, and think it would be a good time to build. This would probably be a weekend place for a few years but then hopefully we'll move there full time (at least I want to retire pretty soon given the awfulness of my work environment, Tim would probably keep working for a while. The house is an hour or so from where he works but we'll figure that out when the time comes).

Anyway, it was a lovely day--close to 70 degrees and no wind at all--and we chatted with the builder and then went and looked at the lot and then walked the dogs on the beach (and more success--Comet had half a dramamine and did not get car sick at all!). So a great day.

This is exciting and scary and you'll probably here more about it than you want to!

Knitting: I finished the hat and started on mittens because I think I have enough yarn left over: 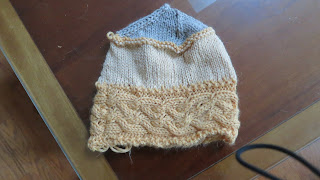 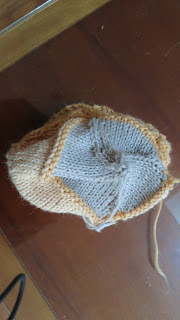 The hat still needs the ends woven in (obviously) and a good blocking: I love how the top of the hat looks.

Here is the cuff of the mitten(turn your head sideways please): 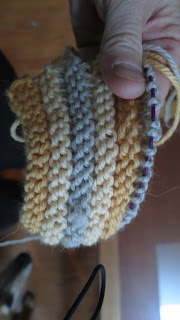 I"m making up the mittens as I go along (as I did the hat) so there were several false starts with these, but I think I know what I want to do.

Reading: I read "The Half Brother" by Holly McCraw. It is about a young man who graduates from Harvard (seriously. What is up with me and Harvard books. I swear to you I did not know this) and then goes to teach at a private school. He falls in love with the daughter of the Chaplain but there is a VERY BIG SECRET that is uncovered halfway through the book. Then his half brother comes to teach at the school and he falls in love with the daughter. Anyway. It isn't that great. I really zipped through the end.

Watching: we finished up Poldark last night---sigh. So many trials and tribulations.