Back to normal (ish)

Tim got home last night--hooray! He had good flight connections and the drive back to Eugene from Portland was traffic free. The dogs let us sleep in til 7:30 so that was nice and then we took a walk in the coolness of the morning. It is supposed to get warm again but it is really enjoyable to have to wear a sweatshirt in the mornings.

Yesterday I straightened up the house and started and then discarded two books (one called "The Blondes", one called "Infinite Home")...neither really grabbed me. I started reading another book by Julian Fellowes called "Past Imperfect" which so far is good.

I started a new sweater (this is the Tucker sweater *I think* from the new IK): 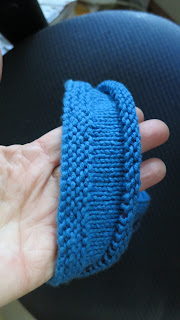 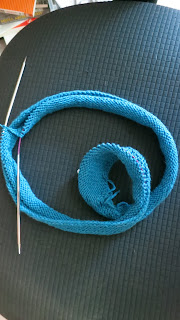 Not much to see here since I just started it--the actual color is somewhere between these two, a lovely teal blue.

I also started the bind off for Jeanie--it is an attached bind off that is done with eight stitches with some cabling in there and is kind of fiddly: 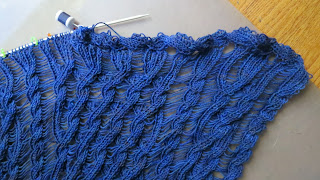 And for whatever reason is taking forever--it probably took me about three hours to do about half of one end last night. However, I did take numerous breaks to drop stitches since that is the fun part.