And I do mean GOODNESS! 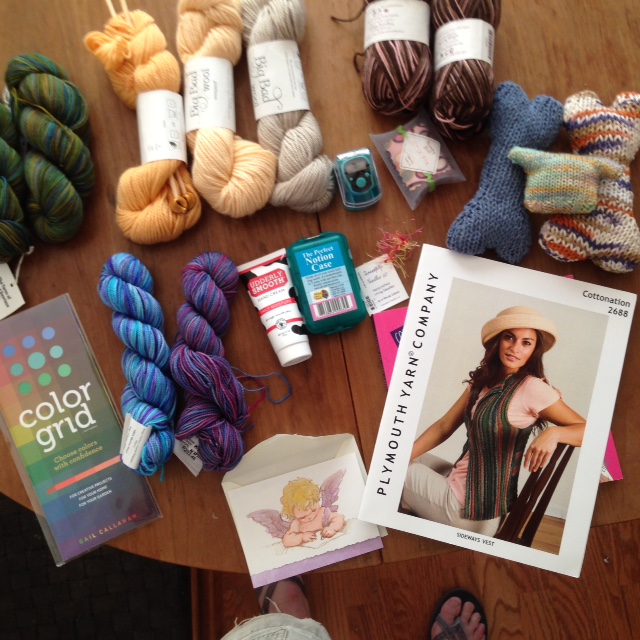 Some of you have participated in the Knitter's Hunk/Knitter's Chick Extravaganza that is hosted by my twinster Kim's blog---the people who nominate the eventual winners are treated to a lovely surprise prize box. I must disclose that this is the second time I've won--the first time was when I nominated Johnny Depp. This year none of my Hunks made it very far (and honestly, I thought David Beckham was a shoo-in) but two of my Chick nominations were the finalists (Tina Fey and Meryl Streep) and Tina eventually won (the Hunk was perennial Twinster paramour Sam Elliott). Anyway--giftees arrived this afternoon and LOOKEE!

There are three skeins of Rhichard Devrieze yarn in 'wintergreen'--I've heard of but never touched this yarn--it is gorgeous Next are three skeins of "Big Bad Wool"--50% merino and 50% baby alpaca in three colors: koi, dreamcycle and linen. This is definitely going to be a slouchy hat--probably with a cable band (but do I start with linen or with koi? Probably koi) Next is two balls of Stroll Kingering in Cupcake Multi: browns and pinks (lovely). Then cute puppy toys from Kim's etsy store Then two books: "colour me girl crush" which is a fun coloring books and a pattern for a sideways vest. THEN some knitting accessories including needles, a notion case, stix fix which I have no idea what it is but can't wait to find out) and..

OMG AN LED STITCH COUNTER YOU WEAR ON YOUR FINGER!

Can't wait to try that!

Last but not least, two skeins of KPPPM which is probably one of the best yarns in the world and FINALLY LAST a copy of the infamous Color Grid which I know my twinster uses all the time! Can't wait to try that out too!

So thank you Kim and thank you everyone who participated in the KH/KC! What a lovely gift!

NOW I'm going to think of a nice way to pay such generosity forward--suggestions welcome!

I hope you have better luck with the stitch counter than me. I've never been able to find a way to wear mine comfortably, and non-obtrusively. But a keen idea nonetheless.

Oh, and the Stix Fix works like a dream.

OH I forgot the bracelet made out of a knitting needle--because I'm wearing it!

Great win! I love the color helper. Kim sent one to me a bit ago.
I love the yarns you've won! I thought I had THE winner this year in the male category...but no! I've never won but I'll keep on trying!