I highly recommend this Aran Tree Skirt for a project. It is just fun to knit. I can't really remember the last time I had such fun knitting something! 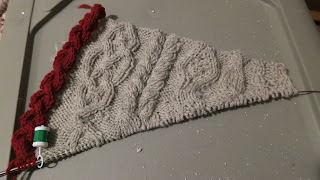 Here is one 'wedge' (out of 11, maybe fewer) plus a few rows on the second wedge--you can see where it is 'turning' a bit to create a circle.

I think it is fun for these reasons:
-every row is different
-it isn't very long at all so the rows go fast AND
-after the fifth row, short rows are used to create the wedge and so there are fewer stitches with every row (the last row is four red stitches)
-it just looks so cool!

I love cables so this is a perfect project for me!
And in other news:

WORK: classes start Monday and while syllabi etc are done I still need to prep classes for next week.
SYMPHONY: for the second year we've taken a subscription for the Eugene Symphony and tonight is opening night! Four pieces including 'An American in Paris'. We're looking forward to it!
READING: I read a YA book called "We Were Liars" by E. Lockhart. It has won a ton of awards. It was OK. Spookily enough there was a Harvard mention (the Grandfather went to Harvard and wanted the grandkids, the main characters of the story, to know he might leave his fortune to Harvard) but just a brief passing one. It was OK, the book....oddly, it was a very very similar plot to a book I read last summer called Belzhar (which was published four months after We Were Liars) so once I read the 'twist' I felt sort of like "been there done that".
Now I'm reading "Black Chalk" after having put it aside for a bit.
LIBRARY ANNOYANCE: I returned several books at the library automated return chute last week and one of them is still showing up as 'checked out' even though I know I returned it because it has a very distinctive cover. I let the library know and they said they'd look for it but if it isn't returned within 30 days of the due date I am liable for the cost of the book plus a fine of 50 cents per day. Now I"m ok for paying for a lost book (these things happen) but I'm not OK with the extra overdue fines since I LET THEM KNOW THE BOOK DIDN'T GET CHECKED BACK IN! I've looked all over the house and it isn't here (which of course it wouldn't be because I remember turning it in) so I'm a bit annoyed with the library (as you might be able to tell).

Hope your week is good.

Ooo, I love the idea of knitting a tree skirt, but I am fooling myself to think it will happen this year. I love how you sold the pattern. All your talking points are wins in my mind :)

I also like the "In Other News" List informative and fun! Good luck with new term! I had your library book situation happen to me a zillion years ago, but with Blockbuster it was horrible, because they threatened me with creditors!

We had that happen at our library even though we returned it to the desk. They were busy. It was a Star Wars book and I'm betting someone walked off with it. We were on the hook for $30.00.

That was the last time I didn't get a return receipt. They used to get very pissy about giving me one, but I don't care. You got me once, you WON'T get me twice.

Glad you are enjoying your knitting ---- isn't that what it's all about???? LOL

Love your skirt. Just love it.