The weekend was a mix of fun and quasi-disaster.

Just a quasi-disaster, though--we drove an hour east up into the Cascades to go kayaking at a favorite place that we haven't been to for a few years--Blue River Reservoir. There are always lots of little newts in the water that make it a fun paddle. I checked online to find out what the parking fee was and saw that there was a fire ban (most recently posted on September 1) but that was all the 'news'. So off we go, and we get there and the reservoir had been 'drawn down' in July. That means: no water. No kayaking.

So we drove BACK into town and did a trip on the canoe canal which was fine but not what I had really envisioned. Oh well.

Other than that, it was a weekend of finishing and football. 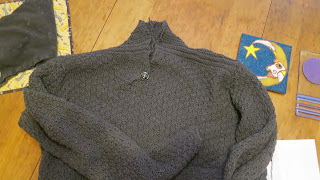 The Catholic sweater got finished---the only challenge was that there were stitches 'held' on the back neck (on waste yarn) but the pattern never tells you what to do with them other than the collar gets attached. I checked some notes on the Rav and most people just went ahead and bound those off so that is what I did.

I'll take a pic with this on--the collar could probably be about an inch more but it is fine.

And there is a non-working button: 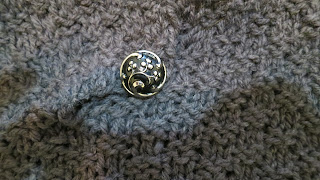 This has been in my very tiny button stash for a while so now it will be on this sweater.

I knit a lot on Sous Sous and also wound some of my gift yarn for a slouch hat.

Reading: finished "Movie Star by Lizzie Pepper" (it was fun but serious at the end) and started "The Admissions" by Meg Mitchell Moore (and it may be Meg Moore Mitchell, I'm not sure). It is good too--about a family where the daughter wants to get admitted to Harvard and only Harvard. But the whole family has secrets that they won't admit to (get it?).

TV: in addition to too much football we watched the first episode of "Top of the Lake"--it is from last year (or maybe the year before?) but it is on the Netflix and you should give it a try, it is interesting--plus New Zealand.

LOVE the Catholic sweater. Ready in time for the POPE"S visit

That's a bummer about the kayaking. You certainly are having a horrible fire season out west. Hope you get some good rains soon to put all those fires out.

Catholic is beautiful and that button is just perfect for it. :-)

I watched "Top of the Lake," mainly for Peter Mullan. I like Elisabeth Moss, too.