The hat is done! 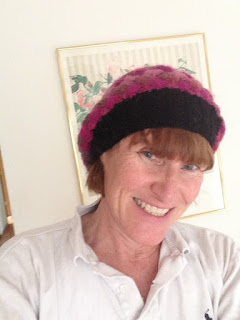 I'll have to take a picture of the top so you can see how well the black works with it but here it is! this fits great--just the amount of slouchiness that I was looking for!

Sorry that the background looks so skewed.

I spent a lot of yesterday working on a paper about Google Maps--one of my honors students did her undergrad thesis on how people use Google Maps and I'm crafting it into a conference paper. It is going pretty well, I may try to submit it to a conference that closes at the end of September. We'll see about that!!

I want to knit a pair of mittens and found some black what-might-be-cashmere in the stash so I may whip that up. I also have some beaded yarn that is a carry-along that could be kind of fun to use on the cuff.

Here's a FWP for you: Firefox broke. Yes, my web browser on my home laptop just stopped working (so now on this computer I don't have firefox or the period key or the comma key---maybe I need a new laptop?). So after a few seconds of panic I downloaded Chrome and put all my favorite websites on the bookmark bar. Crisis averted.

Reading: I'm reading "Snobs" by Julian Fellowes, the producer (I think) of Downtown Abbey. It is a novel and it is pretty fun but then I have a thing for English upper classes.

Watching: Last night I *tried* to watch "Into the Woods" on DVD--I got it from Netflix knowing that Tim would probably not enjoy it at all (and after suffering through an hour of it--that was confirmed). I saw the Broadway show with the original cast and the cast was good but it just wasn't that magical--it was too stagey---and I believe it was shortened a lot too. Anyway I turned it off after an hour and back it goes.

It rained again last night--not a heavy rain but things are starting to green up just a little. Our park was hardly watered at all this summer and now neighbors are dragging their own sprinklers over there to water some of the trees which are quickly browning out. The park has a small stand of redwoods (seven--I counted this morning on our walk) and they look in distress. Hopefully we'll have more rain and things will slowly get better.

The hat is adorable!!!

You need rain????? Wish I could send you some of ours. We are DROWNING over here.

I really wish I could share some with you folks on the west coast.

Your hat looks great! I'm with you, the amount of slouch really determines whether or not I'm pleased after knitting a hat. Sometimes you want it, sometimes you don't.

Rain? What is rain?!? I dream of these things. Sometimes I swear I wake up around 3:30 in the morning thinking I smell it... Here's to more rain!

I watched that Into the Woods movie while I knit on the plane back from London. Yeah, I dunno if I would've appreciated it as much if I wasn't a captive audience, if you know what I'm saying.

Btw, if the keys are still working with Chrome than it may be something with that browser interface. If you're feeling fancy, you could uninstall and then reinstall the latest version of Firefox, but I have gone to the dark side with Chrome as well now. So you could just leave it be and carry on ...

You are so freakin' adorable!