Today--HOORAY--the All Blacks/Springboks semi-final is being aired on NBC! Starting at 11:30 Pacific! It isn't live but the game is going on now--so I"m avoiding Twitter and FB so it will be like watching it like! GO ALL BLACKS!

Now that we have that out of the way: 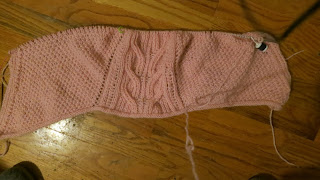 Here is the front of Sous Sous. Right now it looks just like the back but the separation for the next starts very soon (after the fourth repeat) and so this will start going faster as the stitch count decreases. I also realized that since this is oversized there is a lot of sleeve knit as part of the front (you'll see once I put it together. 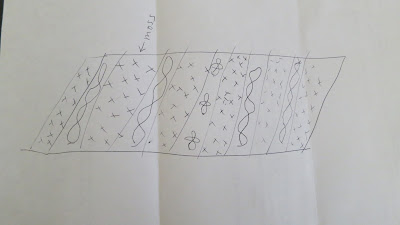 I also saw a pretty pattern on Rav last night called "the Inara Wrap" and thought I'd like to do a wrap that is sections of cables separated by sections of Moss Stitch (because I'm all about the Moss, 'bout the Moss, no garter) so I kind of sketched it out. Nice yes? It would be knit  starting with the moss section on the right and the cable sections use the cables that start and finish without going to the ends of the knitting (kind of like the cables on Tucker and on the other sweater I have with this type of cable--don't remember the name but it was from IK a few years ago). The Elsebeth Lavold books I have provide several charts for these types of cables so I'm kind of exciting about designing and knitting this. Stay tuned!

Also, there were two free patterns on the Rav yesterday--Traveling mitts and Traveling hat, that have a traveling cable which I like. So I got those and put those on the list.

Moss with cables is so classic and lovely!!

That's going to be beautiful! And, whether you like it or not, you have been and remain, my inspiration for getting the knitting mojo back before mid century. Thank you! and Good night. Have fun watching your finalé!

Love the cables on the front of your sweater.