Yesterday was glorious (from a weather perspective). Tim and I were both feeling weighted down by events of the week so we went out for lunch and then drove into the 'country' (for lack of a better word) to find a place selling pumpkins.

It didn't take long to find a place--It was called Larry's Berries or Harry's Berries or something like that--anyway, it was an 'honor system' place and the sign read that all pumpkins were $5. 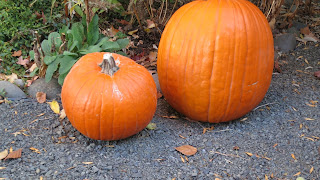 Oh this isn't a very good picture, let me take another one and put my shoe in it so you can see how big they are. 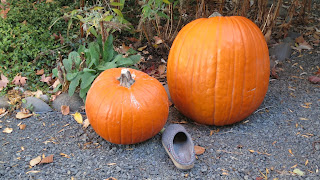 The one on the right is, according to Tim, close to 50 pounds--it comes up to my knee. The one on the left is probably about 20 pounds. We think we got a good pumpkin value.

In other news:
-I knit a lot on the pink thing and screwed up a cable so had to tink. Not fun.
-Yay Ducks!
-I'm reading 'Fates and Furies' and now really like it. It took a bit to get going (not long) and is really good.
-I'm also reading 'The Battle of Versaille' which isn't about war but rather about fashion design (the first 'big' show of American designers in Paris). I didn't realize there was no real original American fashion industry until the late part of the 20th century, so it is interesting in that way.

Hope your Sunday is lovely!