It's the Friday after what was sort of a relaxing and sort of a frenzied day at home yesterday.  We hung out in the morning and took the dogs for a walk, and then watched the dog show. Then Tim scrambled around getting the turkey on the Big Green Egg and I scrambled around prepping the side dishes. We watched football while getting up to check on things (we felt that one of us was popping up every five or ten minutes) and then came the last half hour frenzy of pulling it all together. Which we did: 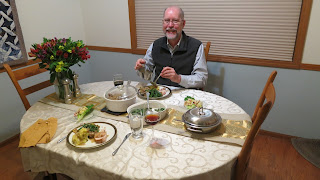 I forgot to take the picture of just the table so you get the table AND Tim! The beautiful flowers (from yesterday too) are from our friends Joonghwa and Soojung. We are their 'adopted' parents--Joonghwa was an exchange student at UO many years ago and went on to get his Masters and PhD in the US. We would catch up once a year at the American Academy of Advertising conference. He met Soojung, a PhD student at Minnesota, several years ago at one of the conferences and they got married last year.  They are both wonderful people and we're thankful for them although we wished they lived closer than North Dakota (they are both on the faculty at UND). The table runner is also a gift from Joonghwa from several years ago. And the china is my mom's china, and the stainless steel round serving piece and the gravy boat (which has to be on the table somewhere) are two pieces from my grandmother's house (the salad plates too). The white serving pieces were wedding gifts. WOW that is one table filled with memories--I hadn't even realized it til now!

OH I think Tim might be holding the gravy boat. 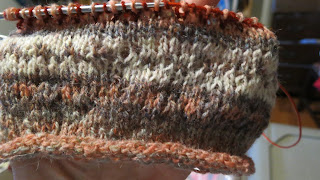 The colors aren't quite as saturated as the one in the W1A but this is a good start! I found a chart of a variety of fair isle patterns so I'm using that. And I'm much better at fair isle in the round than I am at flat fair isle (which says to me I'm not good at fair isle purl if we take that to its logical conclusion).

Today I'm watching the final Duck game of the season and I WILL finish "City on Fire" as I have only 100 pages left (out of 900!). What is your Black Friday day like?

My wedding china is white. People were wondering left and right why we didn't choose something with color or design. Because white can be used with anything, DUH!

It looks like you had a great day. Love to all there.

I too like Fair isle in the round! Fun to see the HISTORY of your table settings.
Today:visited a friend while she had chemo. Brought her and her husband Donuts. She's a fighter! Reminds me I have so much to be thankful for.
In front of a roaring fire in the fireplace with Fireman beside me. Lifes' great

We watched some of the dog show! So fun....
Ran out to Hallmark, Bed Bath and Beyond, and Barnes & Noble. A bit on the crowded side, but not too bad. Left here at noon, was home by 3!