I wrote last weekend how all of a sudden a baby was due and I needed to finish up the WIP. What I didn't mention was that I didn't even remember exactly what was left to do---or to say another way, I had no recall of exactly what I was making. Except it was pink. Did it need sleeve? A collar? I knew it needed two legs--that was all I remembered.

Onward! Here is what it looked like when I started (sorry for the sideways-ness---this is a good approximation of the color, at least on my monitor, and BIG SIGH OF RELIEF I don't need to put in sleeves! 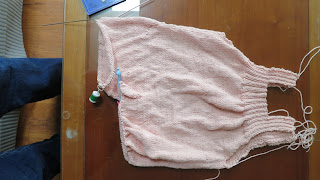 I started work on the first leg while reading "Everybody Rises" and by the end of the afternoon on Sunday I was here: 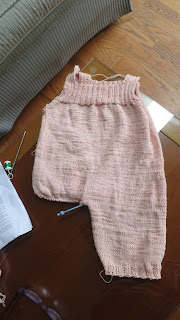 And then by the end of the Broncos game I was here: 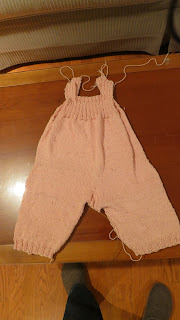 So this weekend I'll block this and go to the button store and find some cute baby girl buttons for the strap. I also have some weaving in to do as well as to Kitchener the crotch (doesn't that sound like a quaint southern expression? "That just kitcheners my crotch!!"). Then off to the new baby who is due on November 20, which is also Tim's birthday.

I had a weird thing happen yesterday. I woke up incredibly dizzy--having to hold on to the walls to get to the bathroom. I felt incredibly nauseous and dizzy for an hour or so---and ended up being sick. Tim was headed out of town but waited around til I felt back to normal (ish) after about two hours, but I still had problems if I had to lower my head and then raise it (or frankly, to stand up quickly). I was very careful about the standing up part for the rest of the day. Today I feel fine.

The Internets of course suggest all kinds of maladies but the theory I"m going with it that I was dehydrated. I realized Monday that all I drank was coffee and a glass of hard cider, and I also took an antihistamine before bed. Yesterday I made a point of rehydrating (water and ginger ale). The dizzy when I wake up stuff has happened before but has never lasted so long--if it happens again I'll go have it checked, but I think dehydration seems to be a pretty good explanation.

So here's a question: do you ever lose (or misplace) (or forget about) a WIP and then get a hankering (apparently is is quaint southern expression day today on my blog) to get knitting on it again? How easy is it for you to find it? Please share any stories you have and I'll share mine this week.

Thanks for my mid-morning laugh; "that just kitcheners my crotch" cracks me up!

I don't have any lost WIP stories, but I have had episodes of dizziness like you describe, and they're fairly disconcerting. I finally went to the dr., and he thought it was due to fluid in my inner ear after an upper resp. infection and seasonal allergies. He prescribed meclizine (available over-the-counter generically as a motion sickness medication) which worked really well for me. A dose of antihistamine/decongestant and meclizine usually takes care of the dizziness for me; crawling to the bathroom is no fun! Hope rehydration solves it for you and all lost WIPS reappear.

Could be vertigo. I had an episode many years ago that lasted a day or so. Then years later, had another one that lasted over a week - awful!!

I keep all my projects in separate bags and in a bin or baskets in my family room. So I've never misplaced or lost a project (yet - ha)... but I do sometimes go for a long time without knitting on one particular thing - it gets lost in my rotation somehow. And then all of a sudden, I HAVE to knit on it.... And then there is the scarf I had been knitting on, here and there, for a long time. But it had an unfortunate "accident (aka user error)" a month or so ago. I missed knitting on that scarf so much. So I finally got the same colors of yarn again and re-started it....

Oh no! The dizziness story was scary ~ hope it doesn't happen again. Wishing you well.
I have not lost WIPs I just take ages getting round to finishing. Have just completed a pink cardy for Kiki which I started when she was a baby and she will be 4 in January. Fortunately still fits her but the wool is a bit patchy where it has faded from being in the sun. It had became more of a conservatory ornament than a work ~ it was certainly very slow progress!

Add me to the list of people with positional vertigo. No fun....but meclazine fixes it right up.

You can be sure I'll be working kitchener my crotch into as many conversations as possible. LOL

When I put them aside, I have a hard time getting going again, unless the pattern is in the bag with the yarn! So I try to stick to three WIPS at any one time. Im pretty boring and monogomous

When I'm severely dehydrated, I get monstrous headaches. The pain makes me a little unsteady on my feet, but nothing as bad as what you went through. I hope you're all better. <3

I tend not to have any old WIPs around. If I don't like it, or dan't work up the enthusiasm to finish it, I take it off the needles and rewind the yarn.

Oh, yes, I do lose track of WIPs sometimes. The worst is when the yarn/needles/pattern somehow get separated and I don't even have everything I need to make a reasonably intelligent guess as to what I was making. It's particularly maddening when I think of all the hours that I had invested in knitting the item - how could I knit so much and spend so much time doing so, yet have no recollection of what I intended to make. Sometimes, I feel that there's a little place in my brain where such information is stored, and some day, it will become accessible to me again. I hope so.