For the past few days I've wrapped up projects and thought more about what to make next. I've woven in ends, blocked, sewn on buttons--all the stuff I really don't like about knitting (I think that is why I like socks, because I'm fine with wearing socks with no ends woven in. I'm a rebel like that).

Yesterday I also finished the second sleeve for the Tucker sweater so I can put that all together today and show you pictures next week. But there was also one of my favorite things:

THE WINDING OF THE YARN!!

The Winding of the Yarn is so much better than the weaving in of ends and such--there's such happy anticipation and excitement built in (although even more than TWofY I love starting a project using yarn that comes in balls). But anyway--I wound yarn: 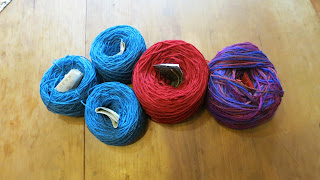 On the left--some Elsebeth Lavold silky wool in the exact same color of the Tucker sweater that will be used for the cable shawl I sketched out earlier.

On the right is some Mountain Colors wool that is probably not superwash but pretty soft and I'll make some cozy socks for Tim.

In the center is possibly everyone's favorite workhorse yarn, Cascade 220, which will be a hat for Tim. It has already begun: 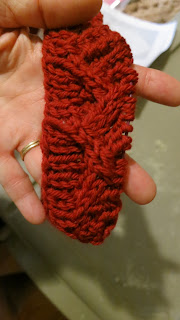 Let's see, in other news:
-Ducks won an amazing game versus #7 Stanford
-I'm reading "Just One Damn Thing After Another" by Jodi Taylor--it is part of a time-traveling series that is pretty light hearted except when it isn't--have you read any of those?
-Yesterday's big errand included shopping for greeting cards. Research shows that the time we spend shopping for greeting cards is way out of whack relative to the amount they cost. I had to buy birthday cards for two people, a baby card, and then just went ahead and bought some 'Peace on Earth' Unicef cards while I was at it. Bam.

I totally agree - the winding of the yarn is so much more fun than the weaving in of those blasted ends - LOL! Well, except when I get the yarn all tangled and have to yell for my husband to "fix it - fix it now"!!

I love looking at and buying cards of all kinds. I'm a big card sender. But wow are they getting pricey!

I spend wayyyyyy too much time choosing cards. I'm 99% sure most people barely notice or care, but it's fun for me, so there you go.

I love all your yarn colors, especially that great red. I also like the start of the hat and can't wait to see what pattern you're using. A friend just recommended that series to me; I'm starting with the short stories since Audible has them for free. The Very First Damned Thing is up next on my ipod.

Cascade 220 is the workhorse you are so right!