I'm not a 'Saturday Sky' person but this was the sky or lack of it this morning: 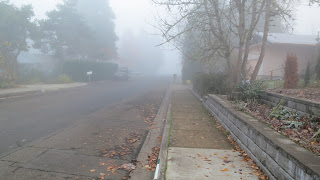 We had incredibly thick fog an hour ago and I was sort of excited that the Ducks might play USC in a fog bowl (we'd have a clear advantage-right--ha ha clear advantage) but it seems like an hour later the fog has lifted and it will e a clear day. Anyway-GO DUCKS!

Yesterday was a busy day, culminating in Tim's birthday celebration. I had a three-hour graduate class Friday morning, then a new PhD student needed to talk as he was having some moments of doubt   (I think he's in a better place now), then a faculty meeting that I snuck out of when we got to the 'Strategic Plan' part (I was there for 'important' votes but honestly---stuff like strategic plans make me nuts). Then home to take dogs for a quick walk and then to correct manuscript proofs that were due two weeks ago (I never did check the due date). So it was a full day, and then Tim came home. 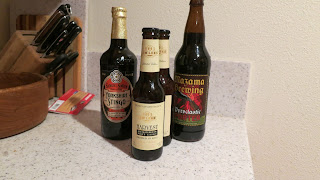 He got three different kinds of beer.

From me he got the Christmas stocking, as well as tickets to the Peking Acrobats in January and a Christmas ornament from New Zealand. The stocking is now hanging: 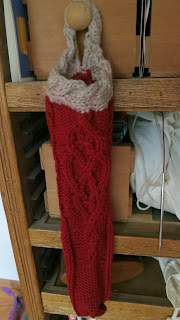 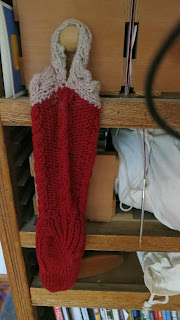 The binding on the top worked out really well, if I do say so myself.

In other news:
-I'm reading a GREAT BOOK called "City on Fire" by Garth Risk Hallberg. I have it from the library on a three week loan and readers--it is almost 1000 pages. I am glad I have a long weekend next weekend so I won't worry about finishing it (yet). It is really good, very much in the Donna Tartt school of writing. It is about New York City in the 1970s, which is when I first discovered NYC (my best friend in college lived there). So I'm really enjoying it.
-We have been watching "W1A" on Netflix and so glad I found it! There was a short comedy series on the BBC called "Twenty Twelve" about the London olympics and Lord Granthan (Hugh Something Or Other) (off to Google) (OK Hugh Bonneville) played "Ian Fletcher"...the person doing the arranging of the Olympics. So W1A is a continuation where Ian Fletcher joins the BBC as 'head of values'. There are some great characters in both series and it is very tongue in cheek--kind of like the British version of "The Office". And the voice over narration is done by David Tennant and he's hysterical. So watch that if you have Netflix!
-I'm going to revisit the teal sweater as I feel less exhausted today. We'll see.
-Only nine NaBloPoMo posts left! We are all awesome!

Happy Birthday to Tim! He clearly has wonderful friends who know how to choose gifts wisely. The stocking is wonderful, and thanks for the book and Netflix recs. I'm always looking for good ones in both of those areas.

re: faculty meetings and "strategic plans" maybe you've seen this? http://chronicle.com/article/Professors-Goofing-Off-in/233017
Amusing even if you don't play!

First of all, a [belated] Happy Birthday to your Tim!

Oh my God, even the words "strategic plan" make my head hurt. Seriously.

Lovely gifts - the stocking is beautiful.

Thanks for the TV show recs - they sound like good possibilities!