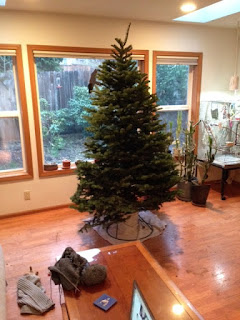 So this is step one in Operation Christmas Tree--you can see Koto on the coffee table!

Today has been a lazy day (or perhaps better to say I have been very lazy--) as I'm all organized to start grading tomorrow and getting to the end of fall term.

I gave up on two books yesterday--Stacy Schiff's "The Witches" about the Salem witch trials and then also a book called "Among the Ten thousand Things" and they were both totally put downable after the first chapter (yay library books!). Then I remembered one of my reading goals is to read some of the   classics that I've never read--Edith Wharton and Henry James, to name two. It is interesting because I've read other novels from the same period that they write about (like Howard's End etc) but I've never read certain authors like Wharton and James--so I checked the Kindle and indeed have several from both. I started "The Buccaneers" last night and I really like it. So that will be a nice sabbatical plan.

Last night we watched the last episode of "Indian Summers" and there's not a nice person on that show. Except maybe the (highly stereotypical) drunk Scotsman.

AND I wrote the Christmas letter and I'll probably post it here at some point!

Your tree has a very nice shape!

Is that a birdie cage I see in the back? What kind of birds do you have.

We had several years ago --- we had a spectaculed amazon, a cockatiel, a lineolated parrotlet, a parakeet, a double yellow head amazon, and an African grey.

Dee--yes we have a Quaker Parrot named Captain MacGregor. And yes that is his cage! He is an active member of the family with an opinion on everything. When we had our bunny he learned her name and would call it out whenever she was out and about--"Louise Louise Louise!"

Awww Oh Christmas Tree oh Christmas tree. THanks for the book warnings, I dont like to waste my time and trust your reviews!

We made our first attempt at Operation Christmas tree yesterday as well. It's little but it's pleasing. I managed only a few rounds of knitting on my rather lazy Sunday, but I had such a vicious headache I was grateful just to have nothing on the schedule to try and get over it.

Good luck in your reading adventures. It sounds refreshing.