For whatever reason yesterday afternoon was a hot mess--it was that type of organizing that just looks like things are even more disorganized when you finish than when you started.  I started getting ready for the party at 5 (it was from 5-8) and as soon as I got finished I realized I hadn't cleaned the cat boxes (something I like to do before the animals eat dinner--at 5--I guess I am a bit OCD about it). So I scooped and for some reason instead of taking it outside like I do every day of the year and put it in the bin I flushed it.

So yeah, it jammed up the toilet. Bad. I plunged (in party clothes) for half an hour and then gave up and went to the party. The house was in a neighborhood that I had never been in before and it was all dark and rainy streets and no street lights and straight up hills but I finally got there (in a bit of a sweat).

And I walked smack into the glass front door. Yep, I made an entrance!

I had a fun time visiting with people (after having my nose attended to), came home, called Tim to find out where the drain snake was, found the snake, and then spent about an hour snaking out the drain (ie removing clumps of litter). By about 10pm, the drain was clear.

So all is well--Tim's flight leaves in about half an hour and he'll be here in about 2 hours so that's good. I didn't wake up with black eyes so I know my nose isn't broken (it does have a fetching bump and scab on it though) and the sun is shining. All is well. 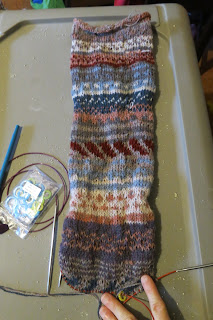 Oh my....you need a day of absolute rest now to make up for your no good, very bad, horrible day.

Oh my! I've had days like that, and somehow you know they will only get worse before they get better. But, then I also figure that everything *has* to get better afterwards ...

Glad you don't have a broken nose.

Oh no! What a time you had!