Yep, the "Koto" sweater has been slowly being worked on. Last night I finished the body and joined the shoulder sleeves (three needle bind off). 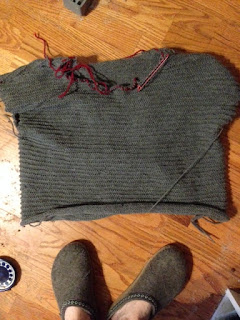 This has been sort of my 'mindless' knitting but it is a corrugated rib which is only about 90% mindless and of course I managed to screw it up enough times to do some major tinking. There's also a bit of curling up at the bottom since I didn't do the hem like the pattern said to do. So that will need some nice blocking to make it bit. Now I have the sleeves which I will NOT be putting the mindless knitting category but I don't think the sleeves will take that long.

Sweaters. Sometimes they work out great, other times not so much.

Other than that, yesterday was filled with walks, lunch out, buying lottery tickets (spoiler: we lost, along with every other American that bought a lottery ticket), watching some football, and reading a pretty silly mystery.

Earlier last week I discovered that the new season of Foyle's War (season meaning three episodes), previously available only on Acorn streaming, was on Netflix so last night after the first half of the Pittsburgh-Cincy game we watched the first episode. We like Foyle's War--very atmospheric. Michael Kitchen as Foyle only seemed to have about ten lines last night although he was of course the centerpiece of the mystery. Then we watched the last two minutes of the football game.

Fandom. It is out of control.

Today--not so sure. I need to vacuum out my car since I will be transporting a few job candidates from the airport in the next two weeks. I have the new "Robert Galbraith" mystery that I might dive in to. We'll see.

Are you and your throat feeling any better?

sweaters and lottery tickets here TOO!!!!!
THis sweater better turn out! Hope yours does too
Mine is simple and I made a mistake as well...haha we are twins