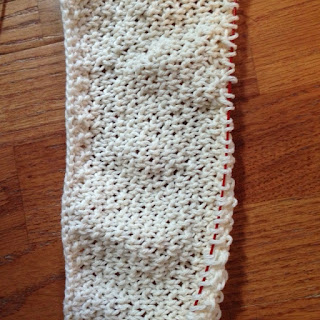 This is the 'sand' section or the third and final section of the 'Turtle's Journey' blanket. It isn't really much to look at but I have been moving forward with it so wanted to show it to you. It should be horizontal but whatever.

We had a fun weekend--we saw the Peking Acrobats last night and it was amazing! And Broncos won! Awesome!

Now for some of Kathy's Monday Meme: Two by Two

* What tempts you most ?  Your local yarn shop sale or an online sale?
I'm not buying yarn for a long time--but it would be an online sale if I was.

* Which do you put off more? Weaving in ends or button placement?
Oh these are both awful. I do hate the weaving in of the ends though.

*Winter hats, Pompom or no pompom?
No pompom (or pompon as some people would say)

*Electric blanket or down?
We have a washable wool blanket from LL Bean on our bed and that is all we need.

*Travel plans: pay for the tour or discover on your own?
We've done mostly on our own, although we did do a 'tour' when we went to Costa Rica. The tour wasn't a tour bus--it was really having a company do the arrangements so there was someone to pick us up and take us somewhere when we needed to be.

*2016 Vacation plans?In the works or already bought the tickets?
We're going to the Big Island and I have to get on that.

*Photographs: outdoors or indoors?
Indoors. Since it is usually raining here.

*Scarf or cowl?
Love 'em both!

Aww Thanks for joining the meme. THe BIG ISLAND! WAHOOOOOO and ALoha on that one~!