We awoke this morning, the second day of the year, to a veritable winter wonderland! Ok not really--it sleeted (what is the past tense of sleet? It seems like it should be 'slated' but that's not right) and then there is a light dusting of snow on top of that. It is somewhat festive looking if ten days too late! 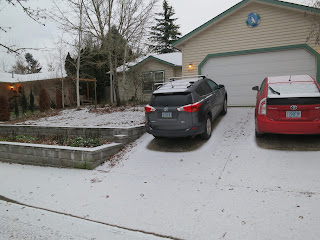 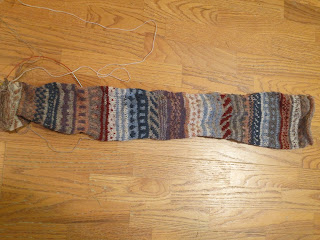 More work has been done on the scarf--it is maybe about three or four feet long right now. I still like this a lot and it is easy to work on while watching TV.  Especially when you need some distractions, as when the Ducks totally blow a 31 point lead in the second half of the Alamo bowl. That game was so strange! Anyway--I really like this scarf a lot. Below is a close up of the most recent section. There are a couple of motifs that I'm repeating in the scarf and the diagonal swipes are one of those. 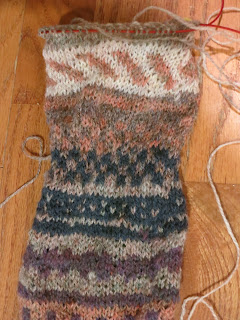 In other news:
-we are watching the most recent season of Ray Donovan and we also re-watched "The Lion in Winter" on New Year's Day. That's a great movie (Peter O'Toole and Katharine Hepburn) and it is really quite racy for 1969 (imho). We also watched the new "Sherlock" last night and it was...trippy.
-I'm reading "The Status of All Things" after giving up on "Remember Me This Way" (a novel about a woman who thinks her husband died and he didn't and he appears to be a bit of a bad person) and "The Firm" (a nonfiction account of the history of the consulting firm McKinsey and Company. Emphasis on history). "The Status of All Things" is a romance/fantasy about a woman who can make things come true by posting them on her FB status. BUT EVERYTHING HAS A CONSEQUENCE! It is fine. Not great. Fine.
-Sabbatical starts tomorrow and I'm pretty ready to tackle a lot of things. Go me!

Love the soft colors of your scarf. Looks like a project that will stay interesting all the way through.

Yes! Go You!! :-D
The blog header photo is totally Excellent, too!