March is almost here--and technically I have only two weeks left of the sabbatical (although finals week adds a third week and then Spring break is there, so it is a month til I have to 'go back to work'. Although this week I have a honors defense tomorrow and a Honors program info meeting on Thursday, so there's a bit of 'back' going on there anyway.

But that's all good. I've met a bunch of goals and while not everything is 'done', I've finished more stuff than I imagined I could or would. The important thing is that everything with a firm commitment--book chapters, papers that are funded by grants--those things are all done. The stuff that isn't done doesn't have that level of reporting, so that's good.

In other news:  Ellen suggested a nice navy for the contrast color of the Trachenwhateversocken and I knew in the back of my head I had some yarn that was the same yarn base as the one I was using (did you follow that??). So I dug it up and indeed it works: 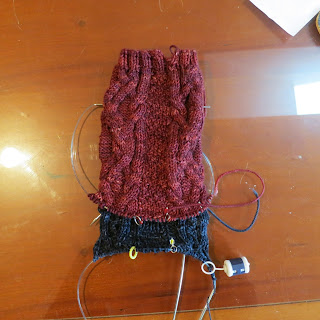 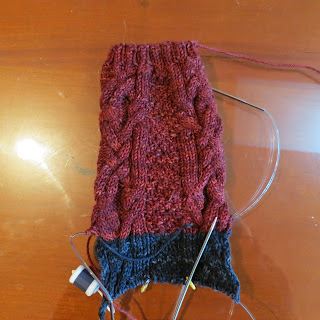 So the heels will be knit in the navy, then I'll do as much sock body as I can with the reddish brown and then finish off the toes with the navy. It will be fine. These are fun socks and are going quickly.

I got a lot done on them last night as we watched a movie called "The Big Blue". It was done in 1988 and directed by Luc Besson who went on to direct La Femme Nikita and The Fifth Element. It was about two free divers (people who dive really deep with no oxygen). Then there's Rosanna Arquette, who seemed to be reprising her 'Desperately Seeking Susan' character with no real value. Anyway--it was a weird movie. There's quite a bit of unusual dolphin love happening. Let's leave it at that. AT least, as I said, I got good knitting time.

I read "The Past" by Tessa Hadley over the past few days too. It was a bit of a slow and rambling book about family issues. There's a bit of a twist that is kind of interesting and overall the book is pretty short so I kept going. I've read other things by her but I'm not sure what. :-) Anyway--if your library has this then try it.

Yesterday we went and got passport pictures taken--both our passports expire in April and even though we aren't going anywhere right away it has been in my head to get them renewed. And there's no easy way to do it but to get the pictures, fill out the forms, and send them in--do they even do them at the Post Office any more? I'm not sure. Anyway, I took care of all that and so that's done.

I'm looking forward to the Academy Awards until I get all bored in the middle, so it will be a High Seas night!