I'm not a fan of daylight savings and wish we could just pick a time and stick with it.  How about you?

Let's see, what can I update you with?

Knitting: did a bit more of High Seas: 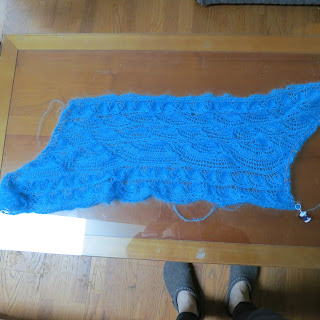 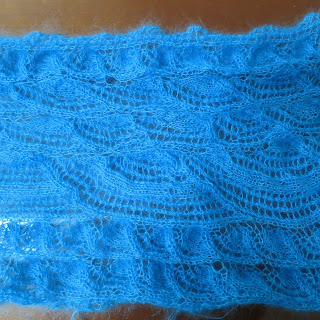 Somehow it doesn't look any bigger than the last picture but I promise you it is!

Reading: I read two books in rather quick succession. First was "What Remains of Me" which is a mystery--it wasn't great but I stuck with it to figure out who did it and why. It is one of those books that is described as 'for those who liked Gone Girl and The Girl on the Train' but I  liked both of those books and this one, as they say, is not like either of those.

The second one is a historical novel called "The Stargazer's Sister" which was based on a real life pair of siblings named William and Caroline Herschel (summary: he built telescopes and she discovered comets) (more here) and it was pretty good but dragged on a bit. If you like historical stuff you might like this one.

Viewing: We have either 3 or 4 episodes left of "House of Cards" and it is an odd season: it seems almost like two different seasons (the first few episodes Frank is worried about the primaries, and then SOMETHING HAPPENS and now for the last few he's not worried about the primaries. At all). Anyway, it continues to be good but it seemed to sort of restart right after the SOMETHING HAPPENS part.

Last night we watched "Our Brand is Crisis" and between this movie and "House of Cards", I can't help but find myself thinking "if I had seen both of those six months ago I would have told you they are totally unbelievable. But now...yeah."

We went to the Home Show and didn't see anything inspirational.

Lots of rain and wind here. Hope it is drier where you are!

Raining buckets here INChicago but the farmers need it. I love your blue waves!!!

I love the knitting! And, yes House of Cards is crazy this season...