Today, Carole asked about ten favorite things in the house made of wood.

1. The dining room table: I bought it when I bought my first (and only) condo in Cambridge, Mass in 1990 (it was on Centre Street, halfway between Central and Harvard Squares. Central Square was still a bit 'dicey' then but it was the closest T stop so I spent a lot of time in Central Square.  There was a great arts and crafts store called Pearl, and a great bar called Miracle of Science. I miss Central Square). Anyway--it is cherry and it came from the Crate and Barrel Furniture Store on Mass Ave in Cambridge which probably isn't there anymore. But I digress.
2. The chairs. You might remember this post where I documented Tim's loving restoration of the chair seats.
3. The Grandfather clock. This was a gift from Tim's parents for his 40th birthday. 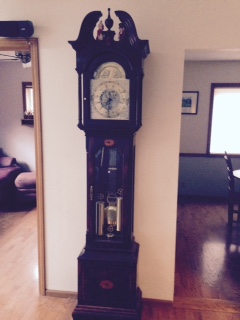 4. The Type case. This is a piece that was Tim's before we got married--I think he found it at an antique store? It now shelves knitting books and projects and a few CDs that we can't seem to let go of. 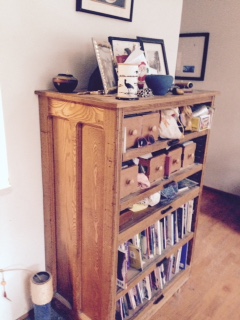 5. A wood wall hanging in the style of Frank Lloyd Wright.
6. A strip built box that holds the remotes (Tim built this). 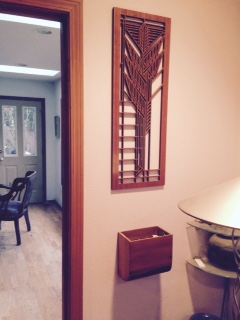 7. A wooden spinning wheel
8. The strip built kayak in the garage (pictures soon!).
9. Our wooden bedframe.
10.Both dressers in our bedroom: one built by Tim, another was custom made for us (we gave it to ourselves as a wedding present).

Yes, we are one woody family!

Love love love the list and especially the type case

What a beautiful clock. And I love all those drawers in your case.

What beautiful wooden pieces! I love the remote box (both the idea and the execution), and I especially love that Tim built several of these pieces. I'm imagining the kayak as almost too beautiful to use!

Tim also built the drawers for the type case. He is an incredible woodworker! And the kayak is really beautiful--he is very eager to launch it!

Love this post! We are a very woody family too so this really resonates