It's been a busy week (as I wrote about previously) but yesterday was a very low key day---Tim worked on a paper and I did some gardening, we have a nice walk with the dogs and a good lunch at our favorite pub, Chow, and I hung out on the patio until the sun went behind the clouds and it got a little chilly. 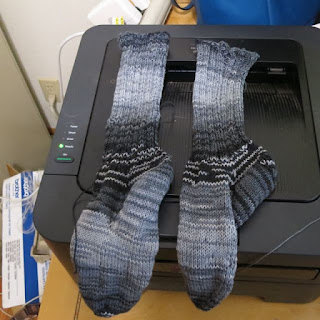 I finished the CoBaSi socks for Tim (still need to weave in some ends). These turned out nicely (love this yarn) and they are also somewhat matched, which is I didn't try to do but it just sort of turned out that way. So that's good. I also cast on for a tank--not the one in the list but one from a new publication. I'll find the name and post it later. I have like two rows done on that so there isn't much to show. I did frog a top that I had started but wasn't excited about to get the yarn back.

Reading: I read "The Madwoman Upstairs" by Catherine Lowell. It is a novel about a young woman who is the last descendant of the Brontes and her messed up life. It is kind of lighthearted and kind of serious. I blasted through it--highly recommend. I also read 'The Girl in the Red Coat" yesterday--this is the "Gone Girl" "Girl on a Train" genre and it was just OK. I had read great reviews but honestly I think I've read enough 'kidnapped child' stories to date.

Watching: We are watching Season 2 of "Hinterland" on Netflix and also "Mr. Robot."

Flowers: here are a few shots of the garden--first, the trellis with the wisteria: 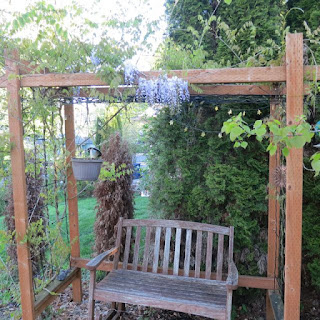 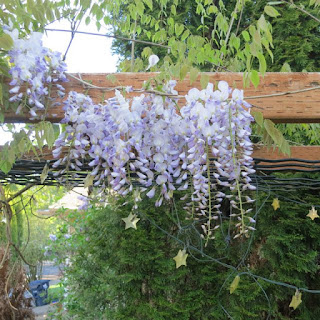 And the bleeding hearts. 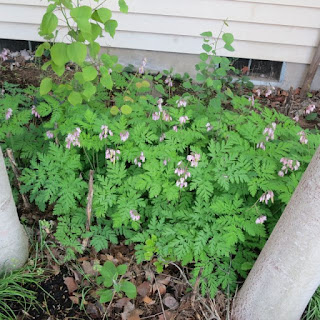 The bleeding hearts are naturalizing which is great. The wisteria have been in progress for about a dozen years and finally look how I wanted them to look the first year!

A bit of a quieter week coming up---we found a lump on Pilot's chest last night so we'll get him to have that checked out. Hold a good thought that it is a benign nothing lump!

Your garden shots look really nice. I have been considering planting bleeding hearts, but need to check and see if they are appropriate for where we are.

I'll be sending good thoughts for Pilot. Our pup is lumpy, but so far nothing serious. However, he had problems over the weekend, so we are taking him to the vet later today. (I'm a nervous wreck.)

Here's hoping both of them are fine. :-)