Carole's Ten on Tuesday today is the movies I have to stop and watch while I am channel surfing. Interestingly, I'm not really a channel surfer unless Tim is out of town and I'm bored. But if I was channel surfing, these are movies that I could start in at any time and know exactly what was going on and love the movie: 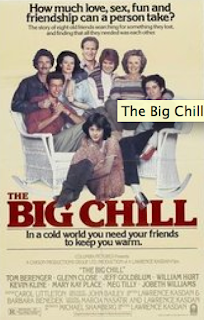 1. The Big Chill. For so many reasons but especially for the young Kevin Kline and William Hurt and the big old house. Kevin Kline grew up in my suburb of St. Louis so I have a special affinity for him.  Plus, the music.

2. St. Elmo's Fire. Before it came out it was being called "The Little Chill" but it really wasn't that good. This had much of the so-called Brat Pack in it, great music, and a pretty cute performance by Rob Lowe. Whatever happened to Mare Winningham?

3. Wall Street. I don't know why but I love this movie. Two Sheens! Darryl Hannah in a yellow suit with taxi cab trim! What's not to love?

4. Fatal Attraction. I guess I went through a Glenn Close and Michael Douglas phase.

5. Dirty Dancing. As easy as it is to mock the hell out of this movie, it is really a good story with good music, fun dancing, and scenery chewing acting. No one puts Baby in a corner!

6.Annie Hall. It doesn't really matter where you come in during this movie, does it?

7. Hannah and Her Sisters. Again, doesn't really matter. Both #6 and #7 are a series of wonderful little stories that make me happy.

8. Dog Day Afternoon. Probably one that you should watch from the beginning but I've seen it enough times that I don't have to.

9. When Harry Met Sally. Such a sweet and wonderful movie, even if they have the geography of Chicago all messed up.

10. Four Weddings and a Funeral. It has the timeline built right into the title. It is Woody Allen - esque in its little stories format. It has a cute Hugh Grant before he got icky. It is british. All good.
on April 26, 2016

Great list! Dog Day Afternoon - I forgot about that one!

I remember going to see Dog Day Afternoon at the movies. I don't think I've ever seen it again! And The Big Chill should have been on my list - the music certainly is #1. Great list!

I get really cranky with Fireman when he has NO intention of watching amovie and he comes across
Caddy Shack or Animal House. I can't pass up: Wizard of oz or APollo 13 or Groundhog day

Thanks for sharing your list and yes where is Mare Winningham? Dang, I feel a IMDB / google coming on. I am a huge Dirty Dancing fan, hello, Jerry Orbach AND The SWAYZE?!? I have the time of my life EVERY time I watch that damn movie.

Wall Street, yes, I don't know why I love this movie. It's an uncomfortable good watch.