That is what the geology shawl looks like right now: 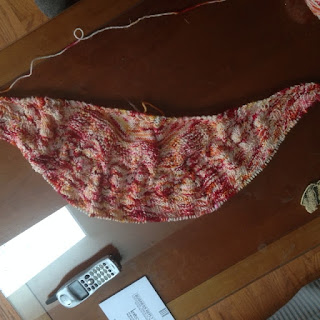 It doesn't quite fit on the needle any more. 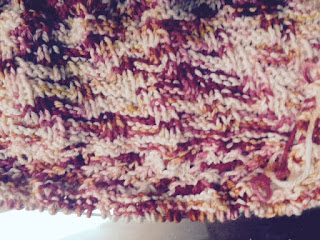 But it should be done this weekend and hopefully it will look more magical when blocked. Maybe not though--I will probably knit another one is smoother yarn, particularly the stairstep pattern which is very cool.

It is SO BUSY at work--this is week 8 (out of 10). In addition to class, I have three defenses this week (and the undergraduate research poster session tomorrow night--a Friday night who thought of that?), two next week, one during week 10 and one during week 11 (finals week).  And two yet to schedule.

I've also been working on editing down a piece for a case study for a journal (nice hit for my grad student) and working on a major revision/rewrite of another piece and trying to figure out just exactly what the reviewers want on a third piece. Good times!

Last night we started watching the spoof documentary series on Netflix called "Documentary Now!" Have you seen it? It is really, really funny.

i need funny will check documentary out!