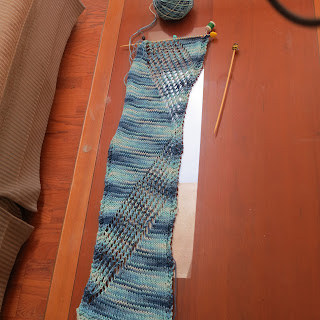 I'm almost done with one repeat--the pattern says that three repeats equal a scarf but I'm also thinking that two repeats and a seam would make a cowl. I think the little pools of color are all working really well for this scarf, so yay! And thanks Twinnie!

Yesterday was a beautiful day here--we went for a long walk with the dogs and I washed the cars (we wash them maybe once or twice a year. They're filthy). I also finished one book ("Let me be Frank" which was cute) and got almost all the way through a novella called "Mothering Day."  I sat on the patio and knit and that was lovely too.

Last night we watched "Truth" which had Cate Blanchette in it (can she do anything poorly?) and Robert Redford played Dan Rather. The script was a bit clunky but it was good. And it was nice to see Dennis Quaid in a movie.

I thought Mothering Day was lovely.

And your scarf is looking great, I love the color!

Um that scarf is just amazing!

In answer to your questio: Cate Blanchett can do nothing poorly (ignore the grammar of that sentence!)! In my opinion she is one of the best female actors out there and I'll watch just about anything she does (the same way I feel about Meryl Streep!). And I agree with you on the movie -- I was expecting it to be way better than it was. Clunky script is a good way of saying it. We've been (well, were) watching Newsroom and for the most part, it is incredibly well written and thus, in comparison, I think Truth just fell short.