No news flash: cria not yet born.

So--those who know me and my knitting know I'm not a big colorwork person. I've done some fair isle stuff but I'm not that good at two hand knitting. I tend to knit too tightly and it doesn't look good.

But hey! I also love a good KAL  and I also love to knit for Christmas but in general I forget to get started until, say, Thanksgiving and that's not good.

That's why Just Crafty Enough's 12 days of Christmas mitten garland knit along is perfect for me. This is the second year she's done this (I didn't do it last year, but I have yarn to knit the mittens) but I'm doing it this year. Every two weeks there's a new pattern for a little mitten and at the end of the KAL you have enough for a garland! A little mitten garland!!!

I worked on Mitten 1 (a partridge in a pear tree) for a bit yesterday: 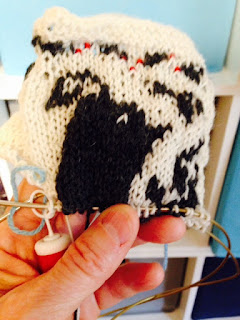 And it has beads 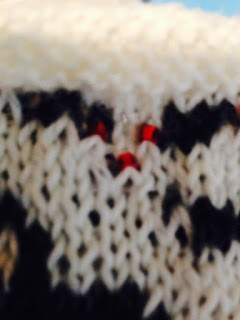 So this is fun and I'm happy--I'm building my colorwork skills and doing a cute Christmas project. My thought is that I'll do the 12 days and in between each day I'll put one from the Advent garland which is pretty too.

So what else? I read two books, "Under the Influence" by Joyce Maynard which was good, and "The Last September" which was OK (interesting construction of the story though).

We watched an interesting and light documentary, "The Search for General Tso", which is about how General Tso's Chicken became a staple of Chinese restaurants in the US. There's some interesting history of the Chinese diaspora and why you can find semi-decent Chinese food anywhere in the country. It's on Netflix.