We have had rain since Friday. This may not seem odd to you---I mean, I live in the Pacific Northwest, doesn't it rain all the time?--but in reality, it really doesn't rain between the 4th of July and Labor Day (last year, the 'no rain' bit started Memorial Day). To have an afternoon of showers is rare. To have three days of showers, with a few pretty hard (but short) downpours mixed in, is unheard of.

But I"m not complaining--the newspaper reminded us that last July we had non stop temperatures in the high 90s and this week we've barely made it into the 70s. It really is quite delightful. And Tim left yesterday for a week in St. Louis so it isn't like we had Big Plans that had to be changed due to the weather.

Enough of weather. Except this: it would have been the perfect day to sleep in, but that was not on Pilot's agenda. He was awake at 6:15 (which is odd given someone was shooting off--something--last night around 3am and he was awake then too and anxious) and invited me to get up too. I invited him to snuggle down for a bit and I listened to see how hard it was raining. It wasn't. I got up and it was just sort of raining, and the weather app on the phone said that there was a 60% chance of rain starting at 7am and the chance of rain would just increase from there. So I got up, fed everyone, put on leggings and a t shirt and a rain coat, and off we went. It was drizzling when we started and we had one semi-strong burst of rain at about halfway through our 3.5 mile walk, but it was a great day for it (cool and no other dogs out) so we had a good time. 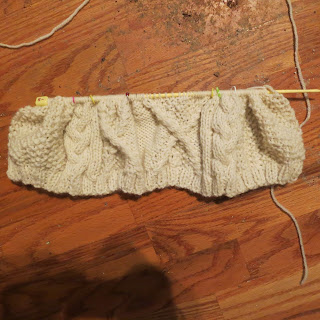 There's only three (maybe 4) repeats in the back (this is the back) so it is moving along quite nicely.

I've been reading "Modern Lovers" by Emma Straub and I like it. I am not sure I'd hihgly recommend it but it is in interesting take on the challenges of modern families today.

On my agenda today: if no cria comes I'll watch (and knit) during the soccer finals at noon. Not sure what else.

Hope it is lovely where you are, even if it is raining.

Quick update: I got a text from the farm that Brownie might have been in pre-labor (a several-hour stage prior to labor) so bopped out but it was a false alarm. But she has started dilating so the cria should be here in the near future!