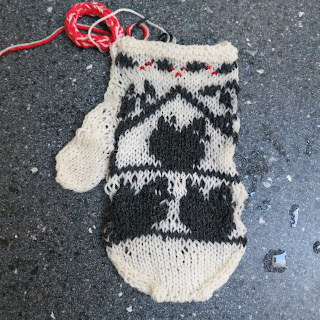 This mitten had quite a bit of white space so it was pretty easy to whip up. You can see the three hens there, yes?

And the other side: 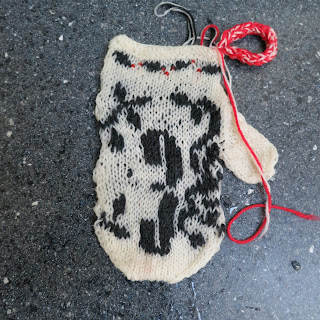 It needs a good blocking. And a good weaving in.

In other news:
-my Fitbit broke last week (I had a Fitbit Charge and the button that you push to see your steps and the time, etc fell off) and since it was no longer under warranty, I got a new one for 50% of the cost. That's not bad. They didn't have the Charge with a black band so I got an Alta with a black band. The Alta doesn't do flights of stairs but it also doesn't have a pesky button--you tap it to get the count. And you can easily get reminders to get up and move. So that's a win.

I'm not doing that great on Book Bingo--I've read several books (honest) but I've also started and not finished a bunch. I read:

"The Singles Game" by Lauren Weisburger (who wrote one of my favorite books of all time, The Devil Wears Prada, and has written kind of dumb books since then) which was OK. This is about the life of someone on the professional tennis circuit. Kind of interesting but kind of not.

"Marrow Island" by Alexis Smith. This sort of reminded me of "The Lightkeepers" only it wasn't quite as good. A woman returns to her home in the San Juan Islands 30 years after a major earthquake to investigate a colony of people who live there now. It is fairly short (a plus) and one of those books where you have to wait to the very end for all the questions you have to be answered---unfortunately there's not a lot to make sure that we care about those questions. But it is short.

"Rich and Pretty" by Rumaan Alam is another short book about the nature of women's friendship in the modern age. It is really good, the two main characters are great and you can relate to them, and I'm stunned this was written by a guy.

I had one of those situations where six (SIX!) new books I had on 'hold' at the library all became available at once. So I'll be reading a lot in the days to come!

Finally, here is a photo of Brownie taken as she was going into labor. 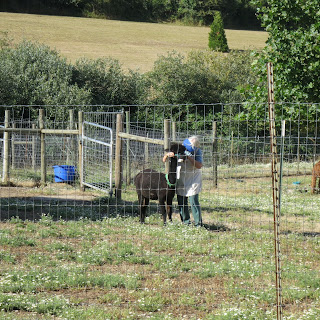 Oh gosh. Im sad seeing her. Im glad you had the courage to post her beauty again though. Hugs and more hugs