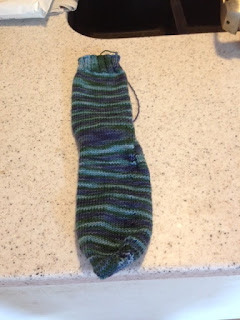 For whatever reason, I haven't been able to focus on this sock too well. However, I do have one done and ta da!

Tuesday I spent most of the day moving pictures off of an 'old' computer that had to be returned to school. Apparently we are only allowed two computers and I had three--which they found out about when I put in a request for a new air. The old computer (not an air--a desktop) wasn't good for much except pictures, but I had to go through almost 4000 of them and cull out knitting ones (about 3000 of them).

Today I went to the farm and we bred Tink to Kokopelli. Keep your fingers crossed that it takes.

Tink plus Kokopelli equals Kokopink! I hope hope hope the breeding goes very well.
Love any sock. THe striping in that one is great

My knitting is slow going but at least you have ONE sock to show for it. Nothing right now, nothing from me.